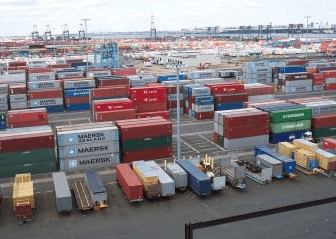 Some 7.3 million metric tonnes of cargo goes through Takoradi Port

As of the end of November this year a total of 7.3 million  metric tonnes of cargo had passed through the Takoradi Port as against six million metric tonnes in 2016, representing a 1.3 metric tonne increase.

Captain Ebenezer Afedzi, Director of Port who announced this  during a press soiree in Takoradi said due to the expansion of the port and the construction of a container terminal, the figure might go up to 8.5 million  metric tonnes by the end of December this year, representing 2.5 metric tonnes increase.

Capt. Afedzi said container cargo was however not doing very well and that vessel call recorded only one percent.

He was happy that the port did not record any major incident in the year under review.

Capt. Afedzi said under the port’s expansion programme, it had  partnered Ibistek Crowley a Ghanaian Private company to  build a 370 million cedi multipurpose Terminal container with 16 depth  litre thereby making the Takoradi port the  only one in west Africa with such a facility

Capt. Afedzi  announced that a Belgian company has also been engaged to build a conveyer loading system at the terminal, which he noted would reduce loading time from the current 10 days to about two and half days.

He said the year under review, the port partnered Ibistek to construct an off-dock container terminal with a capacity of 7,500TU to improve the handling of containers at the port.

The Director of Port Said his outfit also partnered Ghana Oil Company Limited (GOIL) to construct a 13.5million litres capacity of marine diesel oil so that vessels that berthed at the port could refill their tanks.

This he noted would stop vessels from doing illegal pumping on the high sea.

He said General Electric has   commissioned an oil field fabrication equipment in Takoradi for oil companies operating on the oilfields noting that vessels could easily come to the facility for repairs especially for underwater repair problems.

Capt. Afedzi said the Takoradi port which was established in 1928 was alive and on its feet and promised to closely work with the media to enhance the work and development of the port.