Upper East to be declared Open Defecation free by 2019 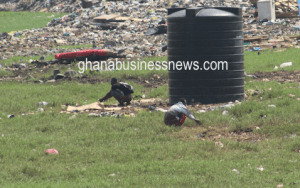 Naba Baba Salifu Alemyaarum, Paramount Chief of the Bongo Traditional Area has said that taking away some powers of chiefs to prescribe and punish deviants in society had contributed to wanton Open Defecation (OD) in the country.

He noted that Chiefs could no longer enact or institute common laws to punish to deter recalcitrant people in society because Ghana had failed woefully to recognise and empower chiefs to utilize their offices in bringing discipline to society.

The Paramount Chief said this at the launch of the region’s Social Norms Campaign, dubbed, “open defecation free Ghana”, and indicated that the failure to recognise chiefs as instruments for discipline “contributed to the persistence of problems as they could not punish or enact laws to compel people to build toilets in their homes”.

He therefore appealed to government to give chiefs some powers to punish people who practiced open defecation within their jurisdictions to facilitate the eradication of the phenomenon.

As part of steps to eliminate the practice, the Chief Director warned that agencies and institutions responsible for allocation of building permits to estate developers to be strict in enforcing laws on the provision of toilet facilities before granting landlords the rights to commence construction.

He said Open Defecation was partly responsible for some of the ailments reported at health facilities in the region and noted that poor health conditions of the citizenry and their attendant challenges affected development in the region and entreated people to stop open defecation.

The programme was attended by Chief Executives of Bawku, Binduri, Pusiga and representatives from the Kasena-Nankena Municipality and the Kassena-Nankana West District.

Mr Charles Nachinab an official of UNICEF said the launch was an integral part of the National Sanitation Campaign launched on 13th of November by President Nana Addo Dankwa Akuffo- Addo and expressed gratitude to the government of Canada and the kingdom of the Netherlands for their contributions and support for the ODF social norms campaign.

He urged all stakeholders and policy makers to help eradicate the OD phenomenon by enforcing by-laws and other policies set by the various agencies in order to achieve the target set for the region to be open defecation free.

A documentary dubbed “the world is not your toilet” was shown to the participants and Ghana ranked 7th worst in the world in the use of toilets according to the Ghana Demographic report of 2014.

The country loses about $79 million annually because citizens failed to have toilets in their homes, according to the Demographic report.