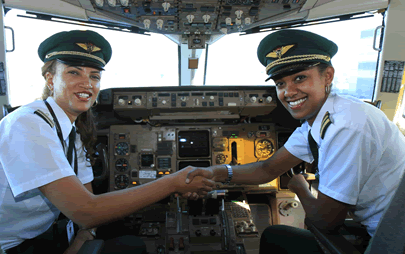 Ethiopian Airlines made history on Saturday by having its first ever flight operated by women in all roles within Africa.

The flight departed from the country’s capital Addis Ababa to the Murtala Muhammed International Airport in Lagos, Nigeria.

According to the airline group, women would fill every role on the flight; from the pilots and cabin crew to in flight ramp operations as well as flight dispatchers on the ground, local website, the Daily Trust reports.

The pilot of the flight, Captain Amsale Gualu, had operated similar flights to other regions in the past.

In 2010 Guala became the first Ethiopian female captain by flying an Ethiopian Bombardier from Addis to Gondar.

The all-female crew which also has Tigist Kibret as First Officer, will be flying the Boeing 777.

The Airline was also the first African airline to fly an all-female crew out of Africa in 2015.

This is not the first time for such a feat in Africa.

In March this year, Malawi Air had the first ever all-female crew from Blantyre, Malawi, to Dar-es-Salaam in Tanzania. The flight was flown by Malawi’s first female captain, Yolanda Ndala-Kaunda, and her assistant, Lusekelo Mwenifumbo. This is Africa reports.

President cuts sod for commencement of $1.5b tourism project

Government will deal with saboteurs of Free SHS – Bawumia