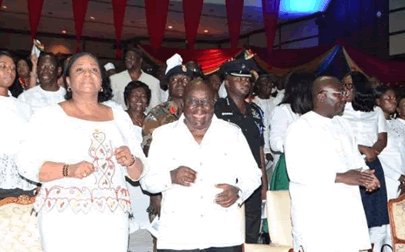 The New Patriotic Party (NPP) on Thursday held an Inter-denominational Thanksgiving Service to exalt the Lord for His mercies that resulted in the overwhelming victory of the party in last year’s polls.

It was on the theme: “Oh Magnify the Lord with Me, and Let Us Exalt His Name Together.”

President Akufo-Addo called on Ghanaians to offer prayers of thanksgiving to God for preserving the peace, unity and freedom of the nation during last year’s elections.

He said: “It is right that we should give thanks to the Almighty…It is He who has preserved us, from a year ago; the peace, the unity and the freedom of our nation.”

President Akufo-Addo said it was pertinent that the nation recognised God’s abundant blessings and mercies that resulted in the party’s victory, saying; “He has given us the opportunity to serve the people of Ghana and for that we have to give Him thanks and glory.”

“So on this day, it is appropriate that we renew our prayers for our nation…let the Almighty continue to preserve the peace, the unity and the freedom of Ghana.”

President Akufo-Addo prayed that God endowed those serving in his Government with the spirit of humility and service “so that they can address the needs of the people of Ghana for progress and prosperity.”

He called on God to imbue in him the right spirit to govern and put Ghana back on the path of growth and development.

“We entered the electoral struggle with one statement: We said ‘the battle is the Lord’s’. The battle is still the Lord’s as we try to build our dear nations,” the President said.

The service was interspersed with poignant and evocative Christian praise and worship songs that set the crowd, including the very important personalities, singing their hearts out and dancing.

The highlight was, however, when President Akufo-Addo took to the stage and gave his signature dance steps to his best tune “Asem papa bi na ma ti, oye, oye”, rendered by the Winneba Youth Choir.

The Reverend Kusi Boateng, the General Overseer of the Power Chapel Worldwide, in a sermon, thanked the Lord for the magnanimity of victory.

He said: ”Though the NPP entered the electoral battle disadvantaged, but some way, somehow, though many were the devices of man, the Council of God prevailed.”

“The victory was not because the President was smarter, it wasn’t because he had access to money, but it was all because the Hand of the Lord established it…and I believe it is right on course for the President to see the need to thank God for this.”

Rev. Boateng admonished all and sundry not to take God’s mercies for granted, but to acknowledge His works and be thankful in all endeavours.

He said it was gratifying that the party had not taken its victory for granted but had acknowledged the hand of God in the successful outcome of the polls.

“The act of thanksgiving is an act of faith,” he said, adding that the President’s show of gratitude to God for the party’s victory was a great show of faith in what God could do.

UN experts on use of mercenaries visit Ghana