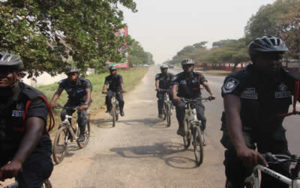 “This will give credence to President Nana Addo-Danquah Akufo-Addo’s policy of One District, One Dam, One District One Factory, Planting for Food and Jobs, etc. So the idea is that, if you plant for food and put the food in a warehouse and somebody goes to steal it, nobody would want to come and invest in your country,” COP Akuriba said.

He said this in an interview with the Ghana News Agency (GNA) on Thursday on the sidelines of a  lecture by the Tema Regional Police Command to the various District Commanders in the Region.

The presentation, which was on the theme, “Innovation of the Community Policing Assistants and the responsibilities of District Commanders at Centres in Tema,” was to brief officers on the CPA concept and other proposed innovations by the police outfit.

He said if the community policing concept took off “we will be executing the vision of the President and also the Inspector General of Police (IGP).”

COP Akuriba observed that community policing was one of the pillars of the IGP’s transformation agenda to maintain peace in Ghana, adding that, “If there is no peace and justice in the community, all developments will come to naught. So this new concept is to make our community safe for economic activities to flourish.”

He said even though only 15,000 personnel out of the 36,000 requested were assigned, they could still carry out their duties perfectly if the communities formed Neighborhood Watch Committees (NWC) with members who would be willing to give out information on crime.

He added that crime prevention was a partnership between the community and the police and, “This is supposed to be a reciprocal relationship which will give information to the police for them to act on.”

COP Akuriba said the first batch of 3,000 Community Policing Assistants (CPAs) were to be deployed across the country in December, 2017.

He said the CPAs who were recruited by the Youth Employment Agency (YEA) and trained by the Ghana Police Service were to assist at least one regular police officer in the various electoral areas to anticipate, prevent and fight crime.

He explained that the CPA model was started in 2006 but it had to be restructured to be more effective and efficient.

“They have been equipped with communication and observation skills and are being recruited from localities they would serve to be able to provide the police with vital information on crime,” he said.

He hinted that, “Though petty crime cannot be totally eliminated in society, crimes such as robbery, murder, etc. have reduced by about 75 percent in the Tema Region.”

Ghana government to launch interoperability of payment system in January