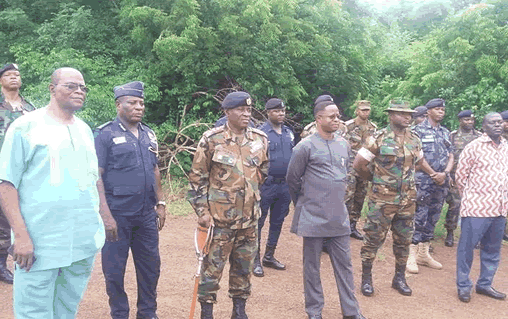 Ms Hannah Blyth, the Programme Manager of the Fund for Peace, has called on government to ensure that a long term strategy is instituted alongside “Operation Vanguard” to address the security concerns in the mining sector.

She said government should not have rolled out Operation Vanguard without it being linked to the broader Multi Sectoral Mining Integrated Project (MMIP) which focuses on alternate livelihood for people.

She said this is was an important concern because now there are serious security risks for young people who have been displaced without any means of income and this has led them into criminal activities and illicit trades.

Ms Blyth was speaking at the fifth national roundtable dialogue held under the theme: “Supporting the Governments Implementation of the Voluntary Principles (VPs) through Dialogue.”

The meeting was to enable stakeholders to share experiences in their various communities and adopt measures in addressing issues in their regions.

The VPs is a set of guidelines to help companies work with local communities and government to improve safety and promote peace in the oil, gas and mining affected areas while respecting human rights.

The meeting was also aimed at discussing government’s plans for implementation of the revised national action plan on the VPs to help move the process forward.

She said there is the need for a much bigger increases on the transportation within communities that have been affected by Operation Vanguard especially as they are expanding to other regions.

She called on government to establish a proper training programme with respect to human rights and security on the ongoing basic operations of Operation Vanguard else security concerns may arise.

He said the VPs implementation has a long process and would take a number of years but the proof of progression was strong with the meeting attendance and participation by stakeholders in the mining and oil and gas industry.

Dr Isaac Karikari, the Acting Coordinator Multi Sectorial Mining Integrated Project (MMIP), Ministry of Land and Natural Resources, said the Ministry was looking at security issues in terms of “Operation Vanguard” and how best to deal with illegal mining activities in the sector.

He said the MMIP was looking at non militant approaches in resolving issues in the mining sector and “Operation Vanguard” had learnt their lessons which had reduced the number of killings and mishaps on the field.

He called for the sanitization of the small scale mining sector as well as a halt to “galamsey” activities.

He said government had put in place an intervention to help fight illegal mining for a period of five years to ensure sustainability as far as human rights and security issues are concerned.

He said the VPs need to be dovetailed into institutional frameworks so that in their action plans definite directions would be given in dealing with such cases.

CAF to give $500,000 grant to FIFA World Cup participants