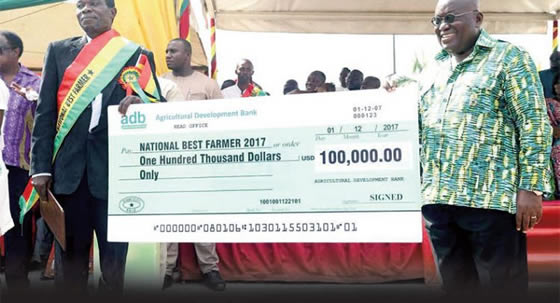 Fifty (50)-year Philip Kwaku Agyemang from the Dormaa West District in the Brong-Ahafo Region, has been adjudged the National Best Farmer for the year.

For his prize, he received US$100,000.00, donated by the Agricultural Development Bank.
He owns the “Awurade Na Aye” Farms and employs in excess of 200 workers. He is into livestock farming, aquaculture, agro-processing and crop planting.

President Nana Addo Dankwa Akufo-Addo presented the cheque for the amount to him at the National Farmers Day celebration held at the Heroes Park at the Baba Yara Sports Stadium in Kumasi.

This year’s event was held under the theme “Farming for food and jobs”.
Madam Mabel Ann Cudjoe, a mixed farmer at Hohoe in the Volta Region, emerged as the first runner up and drove home a Nissan Pick-up vehicle.

The second runner up position went to another woman farmer, Madam Rebecca Commey, an agro-processor in the Ga South, Greater Accra. She was rewarded with a Mitsibushi Pick-up vehicle.

In all 77 farmers were recognized with various prizes for their outstanding contribution to the growth of the nation’s agriculture.

The national best coffee farmer award was given to the Plantation Resources Company in the Western Region.

In line with this, two agricultural mechanization centres had been established in the Eastern and Volta Regions, to give technical support to small holder farmers, enhance farming practices and boost agro-processing.

He announced that 320 small dams would be built across the country to promote all-year cropping.

He indicated that under the Ghana Infrastructure Fund, significant percentage of cocoa roads would also be re-constructed.

President Akufo-Addo said his government’s policies and interventions were meant to increase crop production and returns to the farmer – to make things better for them.

He pointed to the significant decline of the agriculture sector’s contribution to the Gross National Product (GDP) over the last decade – down to 18.5 per cent from 42 per cent and said this could not continue.

He added that factors that responsible for the decline including post-harvest losses, insufficient financing, land tenure issues and outmoded farming practices were being addressed.

President Akufo-Addo spoke of the supply of inputs – quality planting materials, fertilizers, access to credit and strong extension support as some of the measures put in place to raise production and profitability.

Chairman of the Council of State, Daasebre Otuo Serebour II, applauded the award winners and all farmers and encouraged them to keep working hard to sustain the economy on the path of growth.