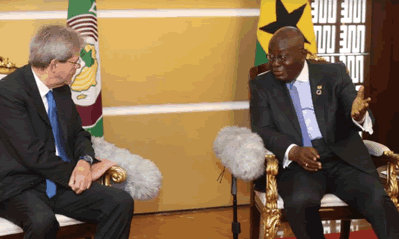 President Nana Addo Dankwa Akufo-Addo on Tuesday stressed the need for Africa and Europe to forge closer, meaningful partnerships that would promote trade and investment between both continents.

He said Ghana and the rest of Africa were looking forward to a more candid, equal, improved, mutually beneficial and not a one-sided, donor-recipient relation with Europe.

President Akufo-Addo made the call when addressing a press conference after holding bilateral talks with the visiting Italian Prime Minister, Paolo Gentiloni, at the Flag Staff House in Accra.

He said Africa sought clarity with regards to its relations with Europe, particularly long-term strategies for sustainable development and trade.

The President was optimistic that the European Union and the African Union Summit scheduled for Cote d’Ivoire on December 29, 2017, would redefine the relationship between the two continents.

“Looking at issues of common concern, the development of our economy, the issue of migration, issues of terrorism that confront both our commitments, it is my expectation and hope that Ghana and Italy will play very constructive roles tomorrow in defining this new understanding, this new relationship between Europe and Africa.”

Commending Italy for its role in Ghana’s infrastructural development, dating back to the independence era, President Akufo-Addo said Ghana had resolved to deepen its relations with Italy, as well as explore areas of interest that would be mutually beneficial to both countries.

He acknowledged the support Italy had given Ghana over the years, saying that, though investments between the two countries were modest, the Italian state owned petroleum company, ENI, has changed that equation by making the biggest investment so far in Ghana.

The President said the ENI investment was extremely important for Ghana’s future, and was upbeat that the move would not only develop the country’s oil deposits but its gas resources as well.

“The involvement of ENI in our oil sector gives us the opportunity to become increasingly self-sufficient in our energy generation. We are looking forward for greater intercourse with ENI that would allow us to go into other areas of the energy portfolio.”

On his part, Mr Gentiloni said he was hopeful that the over 60 years of diplomatic relations between Ghana and Italy would be deepened by his visit.

He praised Ghana’s stability and democratic credentials, which he said, was an example that other African states should emulate.

The Prime Minster said the EU-AU summit would mark the beginning of a new direction for trade and economic cooperation between countries constituting the European Union and the African Union.

He announced a €25 million grant to the government of Ghana that is targeted at Small and Medium Scale Enterprises (SMEs) to support the acquisition of machinery to help boost production.