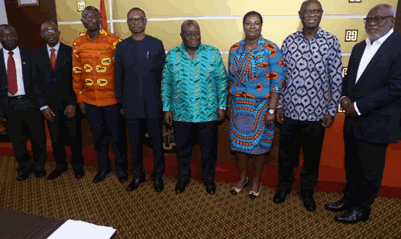 President Nana Addo Dankwa Akufo-Addo on Monday inaugurated the newly constituted Board of the Public Utilities Regulatory Commission (PURC), charging the members to take steps to increase fairness for consumers in the utilities tariff-setting regime.

He said the perception that the utility regulator had become an upward tariff reviewing entity must change, and instead be a body that protects the interest of consumers and ensure the delivery of quality service by utility providers.

“This perception can no longer be left to fester…it must change,” President Akufo-Addo told the eight-member Board, Chaired by Mr Michael Opam, a technical adviser at the Energy Ministry at a short ceremony at the Flagstaff House in Accra.

President Akufo-Addo also tasked the Board to sanction appropriately utility service providers that fail to meet any required standards of performance, because the country’s development and economic growth hinged greatly on the energy sector.

“The Board has a duty to contribute to the development of a competitive energy sector, to drive the industrial and economic development of the country and at the same time, ensure the ordinary Ghanaian has access to efficient and affordable energy.”

The President said since assuming office in January, his government had taken steps that have ensured a marked improvement in the supply and distribution of electricity.

He said government successfully issued a GH¢4.7 billion, in seven and ten year bonds, to settle a portion of the GH¢10 billion debt overhang, inherited from the previous administration in the energy sector, saying that, the remainder of the debt would be settled by the end of the first quarter of 2018.

The President stated further that the initiative was “extremely important” in resolving some of the liquidity challenges faced by the banks and would enable more investments to be attracted into the sector, all with the goal of reducing the cost of energy.

President Akufo-Addo said the 2018 budget read in Parliament last week set out a tariff-setting methodology and cost structure of power production, and this has resulted in recommendations that have been made to the PURC for consideration.

“It is important, in the view of government, that we bring relief to the Ghanaian consumer and Industry”, he said.

The President reminded the Board members that they were not subject to the “direction or control of any person or authority in the performance of their functions”.

However, the statutory composition of the Board, he noted, demonstrated the necessity of thorough stakeholder consultation in the successful fulfillment of the Commission’s mandate.

“The task ahead of you is a challenging one, it is my expectation and hope that you would be up to it and you have my full support to undertake the measures to enable you to succeed. Much of the future development of our country is reposed squarely on your shoulders,” the President said.

Mr Opam expressed appreciation to the President for the confidence reposed in them, and assured that the Board would work to balance the interest of consumers and investors in the electricity, natural gas as well as water sectors.

He said whilst government took steps to offset the legacy debts in the sector, the Board would also ensure that no such debts are accrued and would demand greater operational efficiency and ensure higher standards of performance from utility companies to ensure consumers get reasonable value for their money.

The PURC Chairman said although the institution was independent, it would however be guided by the socio-economic policy of government in the performance of their mandate.

“We would be mindful of the importance of our mandate in respect of transforming the economy through industrialization and job creation. We will perform our role as partners in that collective agenda”, he said.

The rest are Prof. Joe Amoako Tuffour, Mr Ismael Edjekumhene, Mr Emmanuel Sekor and Madam Dora Oppong, all nominees of the President to the Board.