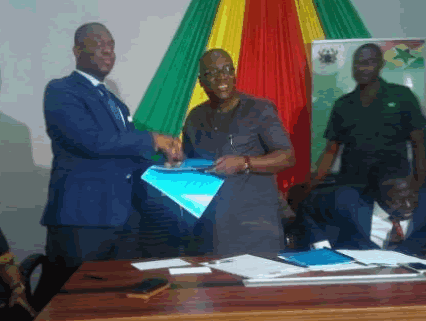 The Forestry Commission (FC) and the Youth Employment Agency (YEA) has signed a Service Agreement to engage 15,000 youth across the country for the implementation of a Forest Plantation Programme.

The programme, under the Youth in Agriculture and Afforestation Module, would enable the youth to contribute to environmental and forest protection.

Mr Afriyie said the Service Agreement would establish a formal relationship between the Forestry Commission and the YEA.

It is also in fulfilment of the Government’s budgetary pledge to create employment for the teeming unemployed youth, hence the allocation of funds for the development and implementation of the forest plantation programme.

He said the funds would be administered by the Agency, which was responsible for the facilitation and coordination of employment opportunities for the youth.

This year, he said, the Forestry Commission, through its Forestry Service Division, is implementing the modified Taungya System under the National Plantation Development Programme, which has engaged over 10,000 farmers across the country and an estimated 4,000 hectares of the forest plantation have been established within degraded forest reserves.

Mr Afriyie said the 15,000 youth to be recruited would be trained and equipped to, among other things, carry out forestry plantation estimation, maintenance of existing forest plantations, coppice management and enrichment planting.

Mr Frimpong said the YEA, after several consultations, was partnering the Forestry Commission, which is the public agency mandated to undertake reforestation projects nationwide, with a good track record of successful implementation of forest plantation programmes to implement the module.

Under the Agreement the Youth Employment Agency would make a monthly contribution of GH¢6 million as support towards the implementation of this programme.

Illicit funds flow from Africa ought to cease – President Akufo-Addo