McVitie’s Digestive to celebrate consumers as it turns 125 years 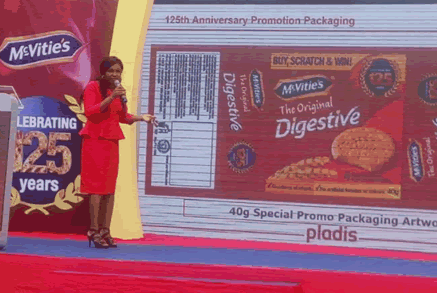 Pladis, the owners of McVities, Godiva and Ulker brands, has launched a national consumer promotion campaign to celebrate its consumers as part of the 125th Anniversary of the McVitie’s Digestive Biscuits.

The McVitie’s Digestive Anniversary promotion, which commenced on Monday, November 20 and would run for six weeks until December 31, would offer consumers the opportunity to win some prizes.

She explained that consumers would have to purchase the McVitie’s Digestive special promotional 40g pack to participate in the promotion and stand the chance of winning the cash and airtime prizes.

Madam Nnodi said after purchasing, the consumer would have to look for a white label pasted on the promotional packs and scratch the foil to reveal the unique promotional code.

She said the consumer would then have to text the code to the Short Message Service (SMS) Code 1393 at no cost, to enable him or her to enter the draws for a chance to win any of the prizes.

Mr Ali Jaber, the Managing Director of Pladis, Sub-Saharan Africa, said the promotion was the first ever from the McVities brand and formed part of the company’s commitment to bring happiness to the world with every bite of quality and delicious biscuits and confectionary products.

Pathologist in MP murder case ordered to appear in court