GRIDCO and KEPCO sign agreement for Centre of Excellence establishment 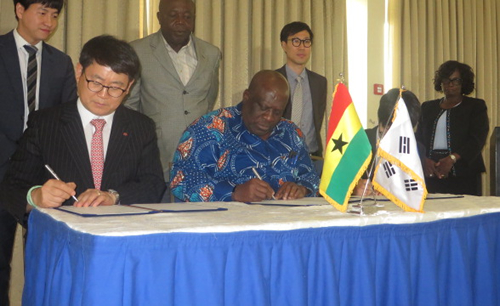 The Ghana Grid Company Limited (GRIDCO) and the Korea Electric Power Corporation (KEPCO) have signed an agreement for the establishment of a GRIDCO Centre of Excellence at the Kwame Nkrumah University of Science and Technology.

The training centre would be equipped with the state of the art facilities that would be available to the engineering community and universities in Ghana.

The signing took place on Wednesday in Accra at a ceremony to commemorate the Project Completion of the Human Resource Development Infrastructure Plan Establishment for the Ghana Transmission System.

Mr. Jonathan Amoako-Baah, the Chief Executive Officer, GRIDCO, said the first phase of the project was signed on March 16, 2013 with $2.6 million funding from the Government of Korea.

“All these key tasks have been completed through the efforts of the staff of the two utility companies with support from KOICA,” he said.

Mr Amoako-Baah noted that a total of 80 of their technical staff were initially selected for the training of trainers programme at the fundamental level from three core operational areas.

He said out of these, 40 were chosen to participate in an advanced offshore training in Korea to serve as the main core trainers.

“I will be the first to admit that GRIDCO has benefitted immensely from training received for its staff under the first phase of this partnership; both offshore and in Ghana,” he stated.

“Our mandate is to grow GRIDCO into a high performing organisation and this growing partnership with our Korean friends will serve as a catalyst to make GRIDCO the model electricity grid company,” he added.

Mr Amoako-Baah said: “Working with our Korean partners has made us better off and we can already see immense prospects ahead with our efforts to grow a grid consultancy that will take a share of the growing electricity market within the sub-region and beyond.

“We can also see ourselves going into Maintenance Agreements with the Mining Companies and some of our partners within the West African Power Pool (WAPP) for the maintenance of their capacitors, transformers and other switchyard equipment”.

Mr Boakye Agyarko, the Energy Minister, in a speech read on his behalf said one of the policy initiatives of the Ministry was to enhance the development of the needed institutional and human resource capacity for the sector.

He said that therefore any programme or project which aims to build or develop the human capital within their utilities, regulators and the Ministry was welcome.

He said the GRIDCO’s Human Resource Development Infrastructure Plan Phase One, which had been completed was in line with this policy and therefore, had the Ministry’s full support.

Mr Kim Yukyum, the Country Director, Korea International Cooporation Agency (KOICA), said Phase One of the project was rolled out to utilise the implementing Agency, KEPCO’s experience to make a customised Transmission Training Environment in Ghana.

Mr Kim Jeong-hwan, KEPCO Director General, said the Centre of Excellence when completed would serve as a training hub for the West Africa sub-region.

Mr Kim Sung-sao, the Korean Ambassador to Ghana, said energy played a key role in the development of every nation.

He said they were looking forward to a greater collaboration between the two nations for the development of the energy sector in Ghana.

Professor Kwasi Obiri-Danso, the Vice Chancellor of the KNUST, in a speech read on his behalf noted that the University would provide the land for the establishment of the Centre of Excellence.

He said the Centre when completed, would afford the KNUST’s College of Engineering the opportunity to obtain requisite equipment in training undergraduate and postgraduate students and also provide continuing education for GRIDCO staff.

Government has no clear-cut policy to stabilise the cedi – GUTA