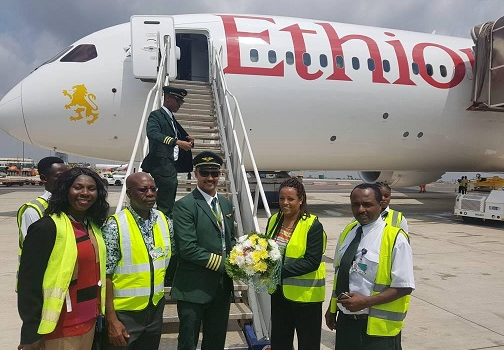 Ethiopian Airlines has landed with 235 passengers to the Kotoka International Airport in Accra with its newest Boeing 787-9 aircraft.

Mr John Attafuah, the Chief Executive Officer, Ghana Airport Company Limited, who welcomed the crew to Accra, said the new Aircraft was a declaration of the confidence the management of Ethiopian Airlines has in the country and the ability of the Airport Company to deliver.

He said the country was gradually becoming the aviation hub of the West African Sub-region with its improved infrastructure and airspace.

“We see this as opening more doors for other airlines to begin to use our airspace to do business,” he added.

He said the Airline believed that there was traffic in Accra and doing business in the country would be profitable, hence the introduction of the B787-9.

He said “the Airport Company is pleased and happy to see the arrival of the newest aircraft into Accra.”

Mr Fikreselasie Gizaw, the Captain of the Aircraft, said the Airline decided to introduce the aircraft because of the traffic in Accra and loading was increasing.

He said the new aircraft, was a 315-seater comprising 30 business class and 285 economy seats, with cloud nine and was very spacious.

He said it was also to give passengers the opportunity to experience the comfort of the new aircraft.

A Togolese passenger told the GNA that it was the first time he boarded the aircraft and the service was good and called on other passengers to patronise the services of Ethiopian new aircraft.

The B787-9 is part of its commitment to deliver exceptional level of service to the African market by operating the latest technologically advanced aircraft in the market.

Ethiopian Airlines becomes the first carrier in Africa to operate the 787-9 and extended a tradition of setting aviation milestones.

The 787 Dreamliner was the most innovative and efficient airplane family flying today and since 2011, more than 600 Dreamliners have entered commercial services, flying almost 200 million people on more than 560 unique routes around the world.