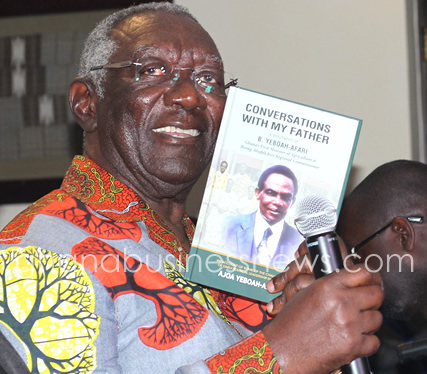 Former President John Agyekum Kufuor has encouraged young Ghanaian and African writers to write books that would help shape the thinking and perceptions of the younger generation.

The former President entreated researchers, students, educational institutions and individuals to patronise the book since it was educative and would positively impact on the society.

He described the late Yeboah-Afari as a pragmatic personality and a pioneer in politics who started his political career as a socialist, but later became an accomplished entrepreneur and contributed his quota towards Ghana’s socio-economic development.

He commended the author for honouring the memory of her father and described her as a strong and principled lady who had contributed towards the development of the Ghanaian media.

Former President Kufuor purchased the first copy of the book for GHC10, 000.

The 300-page book encapsulated the country’s political and leadership challenges and key personalities that were involved in the independence struggle.

Professor Kwame Karikari, the Founder and former Executive Director of the West African Media Foundation, who reviewed the book, stated that there had been upsurge of writing of biographies in recent years because of the country’s stable political climate and the culture of the freedom of expression.

He said the book provided a peep into the physical, political and cultural make-up of the country over the decades from the1930s to post-independence era.

“You get a feel of the stage and progressive advances of social and infrastructural development of the country over the decades, anti-colonial movements and key personalities involved in the country’s freedom march,” he noted.

Prof Karikari said the book provided a clear picture of the untiring life of patriotism of the late Yeboah-Afari over a period of four decades.

The book also captured the biography of the late Yeboah-Afari, the son of the late king of Dormaa in the Brong Ahafo Region, and the tough times he experienced in accessing basic education at childhood.

It recounted how young boy, Yeboah-Afari, travelled long distances to neighbouring community to attend school coupled with political intimidations from the colonial administration.

It captured the political life of young and energetic Yeboah-Afari who was a founding member of the United Gold Coast Convention and later joined the Convention People’s Party in the independence struggle.

The narrative also provided insight into Yeboah-Afari’s contributions to the country’s socio-economic development under the CPP’s government.

The author’s father, apart from being the first Ghana’s Agriculture Minister, also served as the Chairman of the Town and Country Planning who signed the site plan and designing of the Independence Arch.

The book brought to the fore the author’s expert art work and the style of conversation in the form of questions and answers format, which was uniquely captured in vivid geographical words and, therefore, making the script for easy and fascinating reading.

Dr. Kwadwo Afari-Gyan, the immediate past Chairman of the Electoral Commission, who was the guest speaker for the occasion, recalled some fascinating personal experiences with his late cousin, Yeboah-Afari.

Dr Afari-Gyan described his cousin as a trustworthy person, simple and straightforward, with the gift of encapsulating a very serious matter into a humourous physiology.

“He is a family man who is committed to the welfare of the wife and children and a strong believer of the value of education and willing to help people to go to school.

“He is very trusty and easily forgiving and was born to look for a silver lining in a situation and always ready to give people the benefit of the doubt,” he noted.

The book can be purchased at a cover price of GHC100.00 in all popular bookshops across the country and Ghana International Press Centre in Accra.

The event brought together some media gurus including; Madam Elizabeth Ohene, a former BBC Correspondent, Professor Anso Kyeremeh, a media consultant, Mr. Lloyd Evans, President of the Institute of Financial and Economic Journalists, academicians, traditional rulers and family members of the author.

The book was published by Digibooks Ghana Limited.