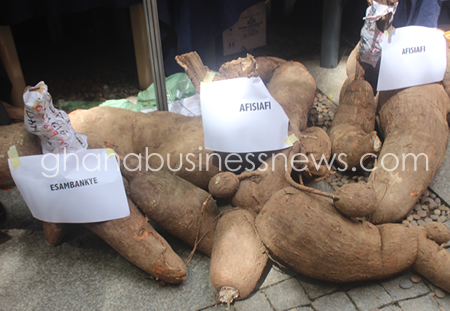 A new breathe of life is running through entrepreneurs in the Volta region. There is ‘jostling’ here and there for space, ideas and support as government’s “One District, One Factory” takes shape.

But even before that initiative, cassava appears to be enjoying a good ride with many small and medium scale entrepreneurs going into cassava processing.

The wonder crop is engendering round table discussions across the length and breadth of the region, gradually turning Volta into a cassava processing hub being pioneered by Caltech.

Caltech Ventures, a Dutch-Ghanaian cassava cropping and processing conglomerate in 2009 acquired 3,000 hectares of land at Hodzo in the Ho Municipality for the growing and processing of the crop, with a target output of ten metric tonnes of industrial grade cassava flour.

In June 2016, the firm became the first to produce cassava-derived ethanol and was optimistic about absorbing the over $200 million the nation spends on importing cassava flour and ethanol.

The company has faith in the out grower scheme which was expected to engage locals on about 70 per cent of the acreage whiles purchasing the crop from farmers in other districts to augment supply.

The cassava value chain, according to Mr Chris Quarshie, Managing Director of Caltech, would impact positively on the local economy by spicing up investments in agriculture, providing jobs and facilitating skills and technology transfer.

Mr Quarshie did not hesitate to enumerate challenges facing the chain, yet those boulders did not seem heavy enough to deter another cassava investor from diving head first into the mix.

Reagvin Ventures, armed with a decade-long experience in cassava processing using traditional methods took over some 4,000 hectares of land in Ho for large scale cultivation and the establishment of a plant.

Checks indicate that almost all the 25 districts in the region have investors interested in cassava processing, with some fast installing facilities in the districts.

Interestingly, the magic being a few entrepreneurs coming together to form partnerships against the highly held belief that Voltarians are solo players in business.

Caltech and Reagvin-two giants hoping to strike gold in an unmapped territory, collaboration and a healthy competition must be their middle ground to open up the region for rapid socio-economic growth.

This could create great opportunities for transporters specialised in cassava haulage as well as technical fabricators and artisans. But the question is, are our young people appreciating acquiring skills in fabrication and artisanry?

Ho, Adaklu and Abutia are some of those districts with the potential of turning the area into an enclave to facilitate job creation, infrastructure investment, skills acquisition and technology transfer.

Felix Izu Nweke (1994) says cassava makes an important contribution to improving food security and rural incomes in sub-Saharan Africa due to its tolerance of drought but needs to be processed into granules, flours, pastes and chips for different markets.

Over 50 different products including; modified starch of various forms, biodegradable plastics, and alcoholic beverages are derived from processed cassava.

Caltech is eyeing the full scale production of liquefied carbon dioxide and electricity from both factory and farm waste using biogas technology.

Cassava derived ethanol remains one of the most lucrative products of the crop and Ghana imports about $70 million annually to feed the growing brewing industries.

Thailand has over 200 processing plants for the crop with a combined annual turnover of $3 billion and Ghana would need a combined effort to enter the global market.

Cassava cultivation is labour intensive and lapses in the production greatly affect the supply chain, thus the out grower and communal farming methods are highly favoured as they place profits in the hands of farmers.

The companies maintain nucleus farms and test out improved cropping methods to be shared with the out growers.

The land tenure system appears to be a major challenge for a good number of investors in the region. Lands are either too expensive or not available in large quantities and for long lease. Some land owners also tend to abrogate contracts after investors had spent large sums engineering them.

The mechanisation of large farms is also a major challenge with high cost of implements and the unavailability of rental services.

Inadequate supply of water and electricity hinders the operation of processing facilities, and even when utilities are in constant supply, sky rocketing tariffs often militate against their smooth operations.

Bad road networks especially to farming communities remain a setback in the supply chain and shoots up production costs. The craggy and un-motorable nature of the Ho-Hodzo road is inhibiting Caltech’s inability to produce and transport the highly combustible liquefied carbon dioxide.

It is therefore important for government to fix road and water challenges in the districts for the success of its “One District, One Factory,” initiative.

The National Board for Small Scale Industries office in Ho confirms that the region was gradually becoming a hub for cassava processing and stated its readiness to support the industrialisation of the region in line with government’s initiative.

Officials in the office said they have started training players in the sector on how to take advantage of funds meant for the projects and expressed joy about the increasing number of SMEs and industries in the region and hopeful of a functioning light and heavy industrial areas in Ho soon.