Volta Region, closer to ‘one district, one fire station’ target 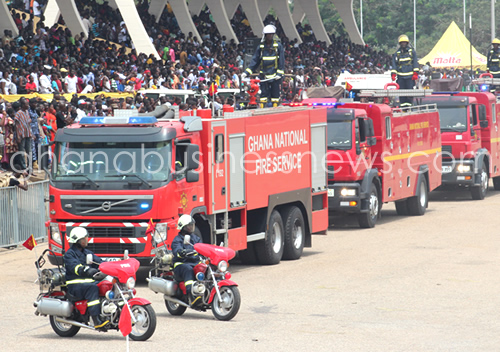 Madam Daniela Ntow Sarpong, Volta Regional Commander of the Ghana National Fire Service (GNFS), has said the region is set to become the first in the country with a fire station in each district.

She said the Service has a policy to establish fire stations in every district, and with 23 out of the 25 districts in the region having fire stations, Volta Region is close to meeting the target.

Madam Sarpong, who was addressing personnel of the Service during a duty tour of Regional Commands by Mr Edwin Ekow Blankson, Acting Chief Fire Officer, said the 23 fire stations were also being served by 24 fire engines, two water tankers, six pickup trucks and a recovery truck.

She said with the exception of Peki, Denu, Chinderi, Jasikan, and Akatsi, all fire stations in the region were housed in permanent structures.

Madam Sarpong said the region recorded a seven per cent decline in fire outbreaks, comparing recorded incidents in September 2016 to that of same period this year.

She said an inspection team made up the Fire Service, the National Petroleum Authority and the Environmental Protection Agency recently closed down about 20 of the 61 gas filling stations in the region for safety non-compliance concerns.

Madam Sarpong said the region’s 396 personnel were inadequate and appealed for the completion of a residential accommodation project at the Regional Headquarters, which had stalled since 1998.

Mr Blankson said the Ghana National Petroleum Corporation had committed to providing protective gear for every personnel in the Service and that a “Strategic Human Resource Policy” has also been adopted to enhance capacity of the personnel.

Government is investigating utilisation of $1.8b loan – COCOBOD