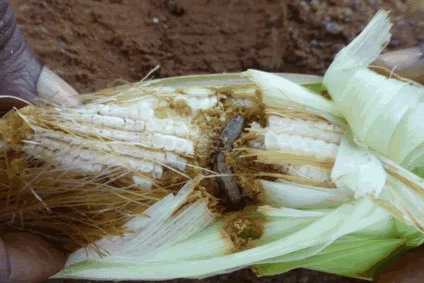 More than 10 acres of maize farms in Assin Homaho, a community in the Assin South District, have been affected by the ravaging fall army worms.

The farmers said the worms have increased in numbers over the least one month destroying maize and some vegetable farms.

Speaking in an interview with the Ghana News Agency, in Assin Homaho, the farmers described the situation as disheartening and a disincentive to farming.

“The worms are feeding on virtually every green-leafy-edible. This is very strange because I have not seen worms that eat and multiply with such speed” said a farmer, Kwadwo Nyarko from Abodweseso.

He said the extent of the invasion required urgent response and a re-energized national effort to wage a relentless war against the pests.

“The fall army worms are actually super-hungry tinny caterpillars feeding on all our crops. They look dull yellow to gray in colour with stripes running down the length of the body and lives on leaves of plants and hatch to re-launch a massive onslaught on food crops,” Mr Nyarko said.

They blamed the situation on the non-availability of the recommended spraying chemicals which has forced farmers to use unauthorized and dangerous chemicals meant for spraying cocoa farms.

“I have sprayed my farm about three times with chemicals meant for spraying cocoa farm, yet they keep coming in their numbers. I have used two different chemicals to spray my farm but it seems they have not been effective,” Mr Enock Baidoo, another farmer said.

The farmers appealed to officials of the District Directorate of Agriculture to get them the recommended chemicals to save their remaining farms.