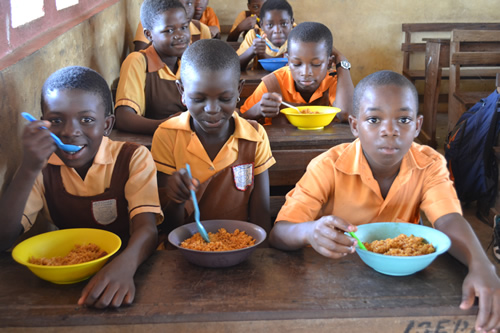 He said situations where operations of the programme were met with violent agitations would defeat the purpose for which the school feeding programme was established and urged all to remain united and committed in working to improve services.

Dr Adu-Nsiah told the GNA in Tamale on Thursday after a five-day working visit to the region to assess the operation of the programme and to help solve problems among some operators especially in the Tamale Metropolis.

He dismissed claims and widespread misconception that selection of district and zonal Coordinators in the Northern Region was discriminated to favour some ethnic groups.

A youth group, perceived to be members of the ruling New Patriotic Party (NPP) locked up the Northern Regional Secretariat of the GSFP for one week, and accused Children and Social Protection Minister, Otiko Afisah Djaba, of bias in the selection of Coordinators and allocation of schools to selected caterers.

Dr Adu-Nsiah denied the allegations saying, “I have gone round and conducted my investigations and those selected are not from ethnic group.  Two Gonjas, three Dagombas, one Moshie and one Konkomba constitute the zonal coordinators and it is not correct to say that only Gonjas occupied positions in the Northern Region”.

He explained all the current zonal coordinators applied for the positions and were not handpicked by the Minister for Gender, Children and Social Protection as claimed by some sections of the public.

He condemned calculated attempts to sabotage the smooth implementation of the GSFP especially in the Northern Region, which has a great number of malnourished children and stressed the need for unity of a purpose in the operation of the programme.

He said, “The purpose of the GSFP is to ensure school enrolment, attendance and retention as well as helping to reduce hunger and malnutrition in our communities”, and assured that everything would be done to ensure smooth running of the programme.

He, therefore, called for the need to work together as one people with a common destiny for the realisation of the purpose of the programme saying, “We must avoid tribal sentiments in running the programme so that our children will benefit”.