Assemblyman appeals to government for motorbikes 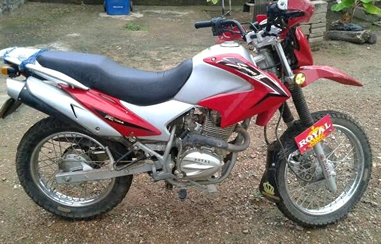 Mr. Johnson Badu Antwi, the Assemblyman for Amoma East Electoral Area in the Kintampo South District of Brong-Ahafo Region has appealed to government to provide Assembly members with motorbikes to facilitate regular visits to their electoral areas.

He said the means of transport would make movement easier for the Assembly members to regularly interact with electorates and discuss development issues in their communities.

Mr. Antwi made the appeal in an interview with the Ghana News Agency (GNA) on Wednesday at Amoma.

He said the roads in the area that linked Amoma Junction to Agyina were in deplorable state and prevented drivers to ply them especially during the rainy seasons, hence the need for the bikes.

He noted that some assembly members served a number of farming settlements which did not have regular vehicles plying those roads, a situation which made it impossible to reach the electorate and brief them on government policies and programmes.

He expressed the fear that under the circumstance, if the assembly members were not provided with motorbikes, their people would lose trust and confidence in them, as they could not reach them to know their pressing needs and assist to address them.

The Assemblyman expressed regret that past and succeeding governments had given several promises to rehabilitate the road but to no avail.

The people of Amoma and Agyina are farmers who produce large quantities of food stuffs such as yam, maize, groundnuts, cowpea and vegetables with cashew as their major cash crop, however, the road that leads to the areas is in a deplorable state.

Mr. Antwi therefore pleaded with the government to consider the plight of residence in the two communities to include the road in its priority road projects as a matter of urgency.

In another development, the Odikro of Agyina, Nana Adu Baffo Adade II, has called on the District Security Council (DISEC) to arrange a Police Patrol Team to patrol the Amoma Junction Agyina road to combat armed robbery in the area.

Nana Adade told newsmen at Agyina that some criminals in the area mounted barriers on the road to rob passengers of their money, mobile phones and other valuables during their farm harvest season between August and October every year.

He appealed to Mr. Alexander Gyan, the District Chief Executive of the area, to respond immediately to their plea to promote security to save lives and properties.

He advised the youth to report activities of suspected criminals to the Police.