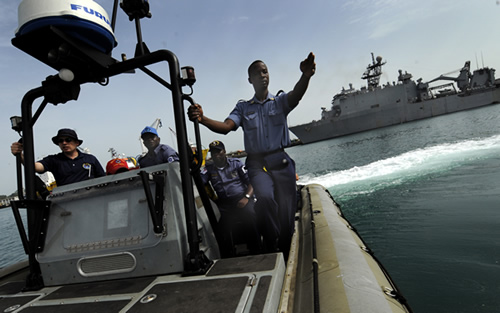 The Minister of Defence, Mr Dominic Nitiwul on Tuesday commissioned four Chinese defender class boats for use by the Ghana Navy.

The four boats constitute part of a grant from the Chinese government to Ghana to re-equip the Ghana Armed Forces.

They were named after four former Chiefs of Naval staff who throughout their career offered distinguished service and exemplary leadership that helped bring the Ghana Navy to its current state.

The four class boats are fitted with two propulsion engines and a generator and are capable of maximum speed of 38 knots with an endurance of 135 nautical miles at 30knots.

They are also fitted with modern navigational and communication equipment as well as a 12.7mm gun.

The boats can be employed in anchorage patrols, maritime interdiction operation against poaching, armed and narcotics trafficking, piracy and robbery as well as other criminal acts at Sea.

Mr Nitiwul commended the Chinese government for the support and hinted that other areas of support within the framework of the bilateral security cooperation between the two communities include the donation of 33 million cedis of which the Navy would get its share.

He said Ghana would remain committed to maintaining and strengthening the existing bilateral and security cooperation.

In this regard he stressed “we understand the inevitable role of the Navy role of the Navy in safeguarding and ensuring sustainable exploitation of our maritime resources to the benefit of our dear country”.

The defence Minister pointed out that the government was also aware of the growing complexity of maritime challenges  such  as poaching,  illegal bunkering  and drug and arms trafficking confronting the Navy which all present enormous implications not only to the country but to all  the countries within the Gulf of Guinea region.

He said with the conclusion of the maritime boundary dispute with Cote D’ivoire recently, oil exploration and exploitation activities which stalled because of the dispute were going to be intensified in the coming years.

Mr Nitiwul said the government was determined to quickly begin negotiation with their Togolese compatriots to peacefully delimit the eastern maritime boundary.

He said the boats were strategic national assets and urged the crew who would be in charge of the boats to handle them within a professional manner as they would handle their own property in order to ensure that the boats remained operational for a considerable time.

The Minister said the government was determined to change the rather strange phenomenon where their respected men and women of the Ghana Armed Forces did not have adequate accommodation.

He said the government has as part of the barracks regeneration programme started the construction of four 16 unit accommodation units at Burma Camp .

Mr Nitiwul announced that the government had also released an amount of 23 million cedis to help complete the SSNIT housing project which was started in 2007 but abandoned.

“As part of the activities of government in 2018, the construction of housing units would be rolled out across all garrisons.”

Madam Sun Baohong, Chinese Ambassador to Ghana who officially handed over the boats said China was willing to make its contribution to building a safe and sound environment for Africa’s socio-economic development and support the durable peace and common prosperity of African countries.

Madam Baohong said China was willing to positively participate in the international anti- piracy cooperation in the gulf of Guinea and to offer help to Ghana on maintaining the order of maritime  transportation and building capacity in infrastructure construction .

For his part, Chief of the Naval Staff Real Admiral Peter Kofi Faidoo, said the introduction of the new boats would augment the Ghana Navy’s fleet and operational capability and effectiveness set to enhance the execution of the navy’s mission of ensuring “a safe,  secure and clean maritime domain”.

He said the arrival of the boats was opportune in terms of the growing offshore oil and gas industry and the rising maritime threats that the Ghana Navy was determined to deal with.

Rear Admiral Faidoo assured the former Chiefs of staff that with their names on the boats  the Navy  would work  assiduously to ensure that their performance was as sterling as their contributions to the Ghana Navy .

The Minister and his entourage earlier paid courtesy calls on the regional Minister Dr Kwaku Afriyie and the Omanhene of Essikado traditional Area Nana Kobina Nketsia .

US Government supports nine communities with $75,000