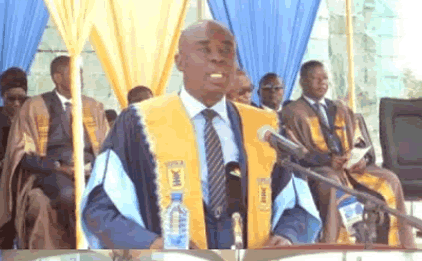 The Management of the University of Professional Studies, Accra (UPSA) has decided not to increase the academic facility user fees for the 2017/2018 academic year undergraduate and diploma fresh students.

Professor Abednego Feehi Okoe Amartey, Vice Chancellor, UPSA, said the decision was taken by Management in order to ease the burden of fees payment on students and their sponsors.

“It is also the policy of this University that once enrolled as a student of UPSA, one’s fees are not subject to change till the completion of the programme,” Prof Amartey said on Friday at the 2017 matriculation of the UPSA in Accra.

It will be recalled that at the beginning of the 2017/2018 academic year, students of the nation’s tertiary institutions sounded alarm bells against the proposed increment in academic facility user fees, which led to the government directing universities authorities to suspend such moves, until Parliamentary approval was given.

He said at the end of the admission process, a total of 6, 015 applicants were offered admission; adding that this was made up of 1,669 diploma students, 3,426 undergraduate students and 920 postgraduate students.

“This year’s total number of registered fresh students happens to compare favourably with the highest number of fresh students recorded in the history of this University when we had the West Africa Senior School Certificate Examination (WASSCE) double intake for the 2013/2014 academic year,” Prof Amartey said.

The Vice-Chancellor announced that the University had obtained accreditation to mount in the 2018/2019 academic year programmes such as Bachelor of Science (BSc) Real Estate Management and Finance, BSc in Business Economics, BSc Accounting and Finance, and Master of Philosophy in Finance.

“In the process of preliminary verification of the entry qualification of fresh students for the 2017/2018 academic year, we noted that a total of 39 admitted students had either falsified their West African Examination Council (WAEC) results or deliberately entered false grades on the University on-line admission system,” he said.

He said the admissions of such students have since been revoked and the matter has accordingly been reported to the police for further investigation.

“I wish to admonish all of you, our fresh students, that the University frowns upon such dishonest conduct which has the tendency to destroy not only your future but also undermine the credibility of the University,” he said.

On financial aid to students, Prof Amartey said the Vice-Chancellor’s Endowment Fund (VCEF) had been launched by the University.

He said the purpose for the establishment of the VCEF was to enable bright, but needy students to receive undergraduate and postgraduate education at UPSA against their personal pledge to work for Ghana upon graduation.

To the students, the Vice-Chancellor said: “My dear matriculants, this is your season and time to study very hard. Your primary objective for coming to UPSA is to study hard towards the attainment of your degree or diploma. During your stay at UPSA, always remember that there is no easy way from the earth to the stars and hard work never kills”.

Dr Kofi Ohene-Konadu, the Chairman of the UPSA Council, urged the students to pursue excellence in their academic work.

“You can achieve this by striking the right balance between your academic work and other social and extra-curricular activities, not losing sight of your main purpose of coming to UPSA,” he said.