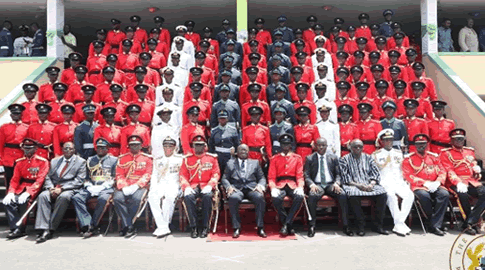 President Nana Addo Dankwa Akufo-Addo on Friday commissioned 107 officers into the Ghana Armed Forces (GAF) and called on them to safeguard the national sovereignty, territorial integrity and the peaceful development of the country.

Whilst congratulating them on their achievement, the President urged them to remain conscious of their responsibility towards the people of Ghana, whose security they are required to protect, and to uphold the blessings of liberty and the prospects of the country for future generations.

“As you enjoy the euphoria that surrounds your achievement on this memorable occasion, do not forget that a responsibility has been thrust on your shoulders…your commissioning into the armed forces is the beginning of your careers as professional officers and leaders…and you are expected to exhibit exemplary conduct,”  he said.

President Akufo-Addo said this when he reviewed a spectacular graduation parade of the Ghana Military Academy (GMA) and Training School at Teshie in Accra.

The parade, which featured cadets from the Regular Career Course 57 and Short Service Commission/Special Duty Course 55, had four foreign officers; two each from Benin and Guinea. This is the maiden graduation parade reviewed by the President.

“You must at all times discharge your duties professionally and diligently….remember you are to safeguard and protect the territorial integrity of the nation and its citizens and not use your position to antagonise the citizens whose sacrifices has made your training possible,” the President said.

President Akufo-Addo, who is also the Commander-in-Chief of the Ghana Armed Forces, reminded the graduands that they were being commissioned into an Armed Force that has carved a niche for itself over the years as unique, disciplined and professional, urging them to work hard to bring glory and honour to Ghana, the GAF and themselves.

He congratulated the four allied cadets from Benin and Guinea, and admonished them to let their conduct reflect the training they had been given.

“As you leave the shores of Ghana to get integrated into the Armed Forces of your respective countries, I hope your performance and conduct in service would reflect the good training and traditions you have received in Ghana,” he said.

President Akufo-Addo called on the graduands to be desirous of acquiring more knowledge due to the changing space of technology, which had transformed the nature of traditional security challenges.

He noted that contemporary threats to security such as drug and human trafficking, proliferation of small arms and light weapons, cyber crimes and the activities of normadic herdsmen, called for new approaches to training in military skills and strategy in order to counter the challenges.

President Akufo Addo said government was aware of the infrastructural and logistical challenges confronting the GAF and the GMA in particular, putting undue strain on the Academy in its efforts to providing quality training.

He, therefore, gave the assurance that his administration would equip the military adequately to enable it to discharge its duties effectively.

Senior Under-Officer Kwesi Arthur-Barnes was adjudged the Best All Round Officer Cadet. He received the Sword of Honour.