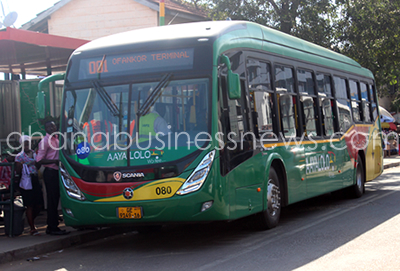 The Greater Accra Passenger Transport Executive (GAPTE) through the Accra Metropolitan Assembly (AMA) has temporarily suspended its enforcement of the laws of the Aayalolo traffic bus lane in Accra.

The suspension was to pave way for a new Board of Directors to be appointed to give further directives on the traffic policy law of the AMA.

The decision was contained in a statement signed by Numo Blafo III, the Public Relations Officer of the AMA and copied to the Ghana News Agency on Friday.

It said the provision of the bus lanes infrastructure and installations was meant for operational efficiency of the Aayalolo buses on the Accra CMB-Amasaman corridors, but were being abused by motorists.

The statement said the AMA and GAPTE would continue to carry out its public education programme concerning the use of the bus lanes and what constitutes the violation of the traffic laws.

It directed the public to its website www.gapte.com for some of the rules of engagement pertaining to exclusive infrastructure and installations meant for the Aayalolo Bus Services.

The statement emphasised that; “Legal provisions under the Local Governance Act 940 and the Legislative Instrument (LI) 1961 of 2009 that empowers the assemblies to regulate, manage and enforce traffic laws.”

It urged the public to also observe any other information that is relevant for maintaining law and order concerning bus priority measures dedicated to the Aayalolo Bus Services.