Artists urged to venture into country music to transform industry 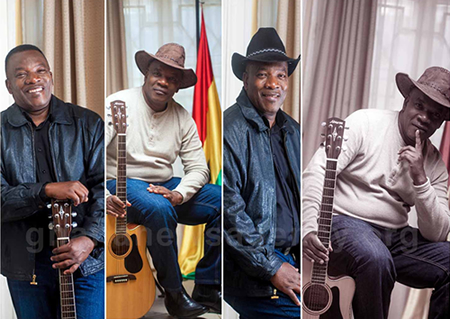 Mr Samuel Allotey, an artist in country music, has called on musicians to venture into country music to bring some transformation in the industry for good returns.

He said Ghanaians loved country music and they would love to see local artists producing it to make the industry vibrant.

Mr Allotey, known in showbiz as Nii Adotey, made the call in an interview with the Ghana News Agency in Accra as he prepares to launch his first country music album.

He urged musicians to collaborate to produce quality songs, which would touch the hearts and minds of the listening public.

Mr Allotey doffed his hat for high-life musicians like George Darko, Kojo Antwi, Daddy Lumba, and Amakye Dede, who had continued to make their mark on the music industry in Ghana over the past two decades.

He said the major challenge facing the industry was how to break even in the Ghanaian market and called on musicians to come together to find a lasting solution to it.

He said he had written songs for friends and evangelism groups and would love to collaborate with the Joyful Way Incorporated to nurture their youth and share some musical insights.

Giving a background to his music career, he said: “My love for music dates back from my formative years when my mother, Ms Constance Kakra Asante, taught me to sing and recite nursery rhymes.”

“I realised these sessions were some of my happiest moments, birthing in me a desire to become a musician in the future.”

Mr Allotey said he received his primary education in the Presbyterian Cluster of Schools at Osu, Accra and also fellowships with the Anglican Church where he developed his love for hymns.

Mr Allotey said he learnt how to play the piano using an old piano in an aunty’s garage after reading the Rudiments of Music Textbook.

“At the age of 10, my father, Mr Joseph Kpakpo Allotey, found a songbook with pop music lyrics in my pocket and condemned my musical aspirations,” he said.

He said: “My father, being a scholar, urged me to pursue my education and read proper courses like architecture and engineering. I heeded to his advice and became a science student at the Ghana Secondary Technical School in Takoradi.”

“I was overjoyed when I was presented with the option of studying the Theory of Music and chose the elective for three years. For my extracurricular activities, I learned to play the guitar, formed a band and served as entertainment prefect.”

Mr Allotey said he was admitted into the Kwame Nkrumah University of Science and Technology to study Mathematics, where he joined the Joyful Way Incorporated in his first year of study.

“The group recorded four of my original compositions; Ofata Ayeyi, which was the title track of the album, Taste of Love, Victory Song, and Christ the Messiah.  Additionally, I played the keyboard and led and bass guitars for the group at various times,” he said.

He said he enrolled in the Ghana Armed Forces as an Air Force Officer Cadet in 1983 and was commissioned a Flying Officer, and awarded the Academic Cane for being the Best All-round Officer Cadet for the Short Service Course.

“I went on to serve in various engineering positions at the Air Force bases in Accra, Tamale and Takoradi. Although I was not in the Air Force Band, I composed the Air Force Anthem in 1996, which they have maintained to date,” he said.

Mr Allotey said he voluntarily retired from the Ghana Air Force in 2001 to pursue a Master’s Degree in Human Resource Management.

He has many songs to his credit including a jingle for the Stanbic Bank and ‘Gridco Way’ for the Ghana Grid Company.

“It is my prayer that each lyric you hear will fill you with hope, love and most importantly, the saving knowledge of Jesus Christ,” he said.