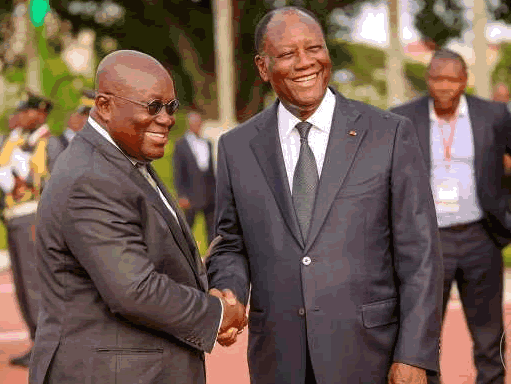 A statement signed by the Director of Communications at the Presidency, Eugene Arhin, said the two-day visit is to further deepen the strong relations between the two countries, as well as explore other areas of co-operation to their mutual benefit.

The visit is a reciprocal one, following President Nana Addo Dankwa Akufo-Addo’s visit to Cote d’Ivoire in May during his tour of the countries of West Africa.

The two Presidents and their respective teams are expected to hold bilateral discussions at the Flagstaff House on Monday, after which the two leaders would address a joint press conference.

President Akufo-Addo would later that evening, host his Ivorian counterpart to an official dinner.

President Akufo-Addo at the commencement of his West African tour in May, spent three days in Cote d’Ivoire, where he called for closer collaboration and a strategic partnership between both nations, particularly in the cocoa sector.

President Akufo-Addo during the visit was decorated with the Highest National Award of Cote d’Ivoire, La Grande Croix dans l’ordre National Ivorien, at a State Dinner held in his honour by President Alassane Ouattara.