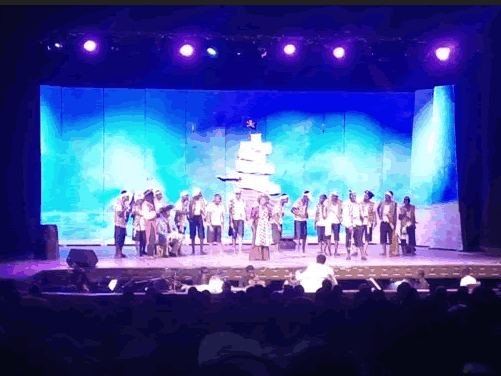 The National Theatre on Saturday was full to capacity as audience were entertained with comic and musical performance of the famous opera, “the Pirates of Penzance” by Gilbert and Sullivan.

The stage performance was organised by the Achimota Old Students Association in collaboration with the School as part of the school’s 90th anniversary celebration.

The thrilling performance raised the applause of the audience from the tunes and lyrics of the outstanding classical music spearheaded by old and present students of the school.

Mr Joel Nettey, one of the Organisers for the event said the story concerns Frederic, who, having completed his 21st year, was released from his apprenticeship to a band of tender-hearted pirates.
Mr Nettey said Frederic met Mabel, the daughter of Major-General Stanley, and the two young people fell instantly in love.

He said Frederic soon learnt that he was born on February 29, which technically means, he has a birthday only once each leap year.

However, Frederic  indenture specified that he remain apprenticed to the pirates until his “twenty-first birthday”, meaning that he must serve for another 63 years. Bound by his own sense of duty, Frederic’s only solace was that Mabel agrees to wait for him faithfully.

President Akuffo Addo and his wife, Former first lady Nana Konadu Agyemang Rawlings and other dignitaries were there to grace the event.

As part of the school’s anniversary, the school had organised activities such as health walk, flag raising ceremony with old and new students, monthly symposium, founders’ day, which preceded with bonfire and a durbar.

The school will in November organise home coming to showcase the creative and innovative works of the students and climax the celebration in December with a dinner dance.