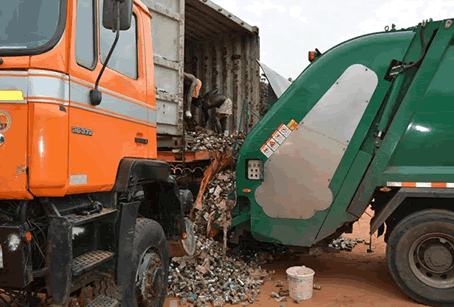 The Food and Drugs Authority (FDA) on Wednesday destroyed 4,500 rotten cartons of “Asahi Mackerel,” imported into Ghana by Dotsisco Ventures, whilst it also works to ensure that Soo Nice Mackerel are not sold to the public.

These unregistered products were imported into the country by Dotsisco Ventures and were subsequently impounded by the Mile 7 District Police following a tip off by residents of Ofankor, a suburb of Accra.

Mr James Lartey, the Head of Communications of FDA, said investigations conducted so far by the Police and the FDA revealed that a total of six-twenty footer containers of the products were imported into the country and documents covering the produces indicated that they were on transit to neighbouring country Togo.

However, an investigation shows that the products were being diverted onto the Ghanaian market, and upon the tip-off the Police impounded it.

He said further investigations have indicated that three-twenty footer container of the consignment containing the Soo Nice Mackerel were transported to Kumasi, Takoradi and Tamale.

Mr Lartey said Post Market Surveillance (PMS) activities conducted by the Ashanti Regional Office of the FDA have led to the detention of 500 cartons of the Soo Nice Mackerel.

He added that the other FDA regional offices have embarked on an intensive PMS exercises to ensure that the product were not offered to the public.

“The public is further notified that arrangements are being made for the products to be destroyed at the expense of the importer.

He also cautioned the public against the patronage or consumption of “Asahi Mackerel and Soo Nice Mackerel”.

Mr Lartey therefore encouraged the public to provide the FDA with information related to its regulated products through any of the following numbers: Hotlines: 0299802933, Toll free number: 0800151000 (free only on Airtel and Vodafone) and SMS code: 4015.

He assured the public of its continuous resolve to protect public health and safety at all times.