October 4, 2017 Editorials/Opinion, Lead Comments Off on Bank of Ghana to keep policy rate above 20% into next year due to nagging inflation

The Bank of Ghana is likely to keep its key rate above 20 per cent well into next year as inflation exceeds its target and economic growth accelerates. Inflation seems to have hit a floor at about 12-13 per cent and faces upward pressure from energy prices in coming months. A resolution to a maritime dispute with Ivory Coast has allowed drilling to resume in an offshore oil field, supporting economic growth and thus reducing the prospects of more rate cuts.

The central bank left its policy rate at 21 per cent at its monetary policy committee meeting on September 2 after cutting it at its preceding three meetings by a total 450 basis points. This ran counter to the expectations of five out of seven economists in a Bloomberg News survey who forecast a cut. The MPC opted to pause its easing cycle in view of emerging risks to the inflation outlook, according to a statement. These risks appear to be centered on an uptick in core inflation to 14.7 per cent  in August from 14.2 per cent  in July and second-round effects from an increase in petroleum prices since August. The headline rate rose to 12.3 per cent from 11.9 per cent over the same period. Nonetheless, the MPC still stated that it sees inflation trending toward its 6-10 per cent medium-term target in early 2018. 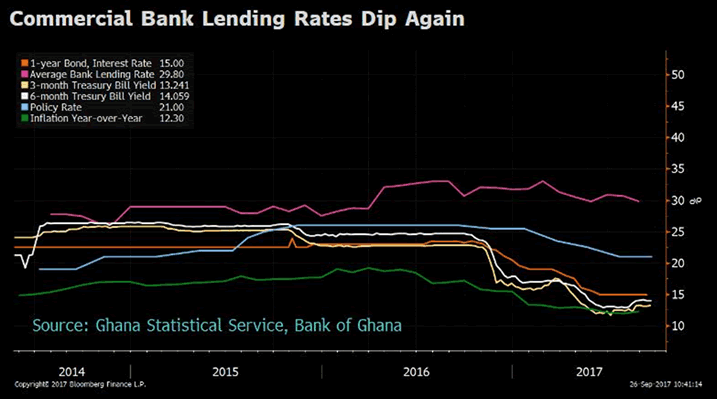 The decision to keep interest rates on hold is unlikely to materially impact economic growth. A drop in commercial bank lending rates below 30 per cent in August indicated that the easing of credit conditions is still permeating through into the private sector. The slow transition of policy rate reductions into commercial banking rates, which probably reflects a desire in the financial services industry to protect capital adequacy ratios, is likely to frustrate monetary policy makers. This will probably add to the case for further rate cuts in November or January. 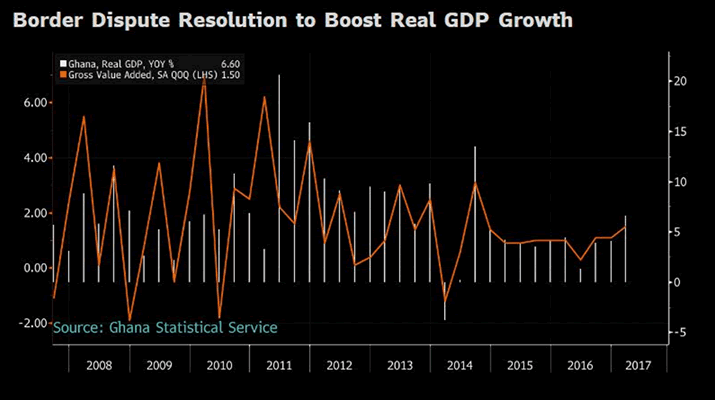 The MPC may have become more focused on lowering inflation to within target in 2018 by a tribunal decision on September 23 that the so-called TEN offshore oil fields are within Ghana’s territorial waters, and not those of neighboring Ivory Coast. This decision will have a material impact on investment spending primarily in oil well drilling in 4th quarter and 2018. This should boost growth, but may also add to inflationary pressures in the economy.

The MPC may also have concerns about emerging upward pressures on inflation. Food price inflation appears to be picking up again and the government has limited ability to shield consumers from an increase in global oil prices in the past quarter. Brent crude prices reached a two-year high of $57 a barrel on Sept. 26. These trends are likely to keep inflation above the Bank of Ghana’s medium-term target well into next year. Add to this the TEN tribunal decision, which effectively reduces the need to stimulate the economy in the near term, and the central bank now looks more likely to keep its policy rate at 20% or above well into 2018.