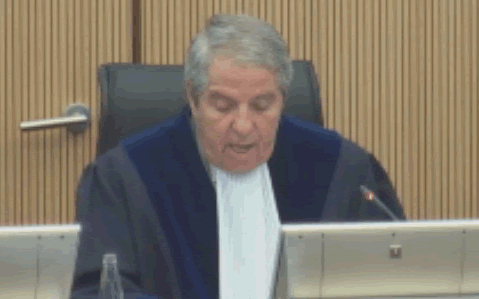 Ghana and Côte d’Ivoire have jointly agreed to abide by the decision of the International Tribunal for the Law of the Sea (ITLOS).

The tribunal on Saturday, September 23, 2017, unanimously held that Ghana has not violated the sovereign rights of Côte d’Ivoire with oil exploration activities.

It also held that Ghana was not financially obligated to Côte d’Ivoire.

At a joint press conference, the Attorney General of Ghana, Ms Gloria Afua Akuffo and Côte d’Ivoire’s Minister of Petroleum, Energy and Development, Mr Thierry Tanoh, read out the joint release in English and French respectively.

It was an emotional scene as parties from both sides shook hands and hugged each other after the court’s decision.

The Special Chamber of the International Tribunal of the Law of the Sea (ITLOS), constituted on 3rd December 2014 to delimit the maritime boundary between Cote d’Ivoire and Ghana in the Atlantic Ocean, just rendered its decision this Saturday 23rd September, 2017.

On the joint behalf of the Presidents and the Peoples of the Republic of Cote d’Ivoire and the Republic of Ghana, I would, like to express our gratitude to the Special Chamber of the International Tribunal for the Law of the Sea for the courteous attention with which the proceedings were conducted.

Our two countries would also like to commend the Registrar of the Tribunal and his team for the admirable efficiency with which the case has been managed, resulting in an expeditious hearing to the mutual benefit of both parties. We are united in the expression of our gratitude to the Special Chamber.

Cote d’Ivoire and Ghana accept the decision, in accordance with the Statute of ITLOS.

Cote d’Ivoire and Ghana seize the opportunity to reiterate the mutual commitment of the two countries to abide by the terms of this decision from the Special Chamber and to fully collaborate for its implementation.

The two countries affirm the strong will to work together to strengthen and intensify their brotherly relationships of cooperation and good neighbourliness.

Agent for the Republic of Ghana

Agent for the Republic of Cote d’Ivoire

Adviser to the President

The Special Chamber of ITLOS says Ghana has not violated Côte d’Ivoire’s sovereign rights with its hydrocarbon (oil exploration) activities.

It says Côte d’Ivoire has failed to prove lack of good faith on the part of Ghana during negotiations between the two countries.

The April 25, 2015 ruling of ITLOS directed Ghana not to drill new wells untill the final determination of the case.

The Special Chamber has accepted Ghana’s argument of adoption of equidistance method of delimitation of maritime boundary between it and Cote d’Ivoire.

Cote d’ Ivoire’s claim that Ghana and its coastal lines are unstable has also been rejected by the Special Chamber of the International Tribunal for the Law of the Sea (ITLOS.

The Special Chamber has however dismissed Ghana’s claim that there has been a tacit agreement between it and Cote d’Ivoire.

The Special Chamber is now considering where the boundary of the two countries starts and ends.

President of the Special Chamber, Judge Boualem Bouguetaia of Algeria is reading the Tribunal’s decision on the Ghana Cote d’Ivoire maritime boundary dispute.

The International Tribunal for the Law of the Sea (ITLOS) will today give a landmark decision on whether or not to affirm the existing maritime boundary between Ghana and Cote d’Ivoire.

A contrary decision will result in the adjustment of Boundary Pillar 55 (BP 55), which has been in existence and mutually respected by both countries for more than four decades.

Officials from the two countries are in Hamburg, Germany together with their lawyers to observe the Special Chamber’s decision today.

The tribunal, which is being presided over by Judge Boualem Bouguetaia from Algeria, has Judges Rüdiger Wolfrum from Germany and Jin-Hyun Paik from the Republic of Korea as members.

Ad hoc judges Thomas Mensah from Ghana and Ronny Abraham, France, were selected by Ghana and Cote d’Ivoire respectively per the rules of the ITLOS. The Registrar of the Special Chamber is Mr Philippe Gautier.

The area in dispute between the parties lies at the centre of the Tano Basin, a proven petroleum-rich basin, generally located offshore.

Ghana discovered oil in commercial quantities in June 2007 and in 2009. Cote d’Ivoire began suddenly, and without notice to Ghana, to repudiate the common maritime boundary, and took the position that the boundary should be re-demarcated.

It even proceeded to write to oil companies operating in the disputed area to stop all activities.

After 10 failed negotiation attempts, Ghana, in September 2014, announced through then Attorney-General and Minister of Justice, Mrs Marietta Brew Appiah-Opong, that it had instituted arbitration proceedings at ITLOS to ensure the resolution of its maritime boundary dispute with Cote d’Ivoire.

In accordance with Article 3 (a) of Annex VII, Ghana appointed Judge Mensah, former President of ITLOS, as a member of the tribunal.

“Despite several years of good faith negotiations, including at least 10 rounds of bilateral meetings, Ghana and Cote d’Ivoire have been unable to agree upon the location of their maritime boundary,” then Attorney-General and Minister of Justice, Mrs Appiah-Opong, announced at a press conference in Accra on September 23, 2014.

The tribunal, on April 25, 2015, refused to stop oil companies operating in the disputed area to stop operation but it stopped the drilling of new wells until the final determination of the case.

Due to the change in government, Mrs Appiah-Opong on February 6, 2017, officially handed over the baton to the current Attorney-General and Minister of Justice, Ms Gloria Afua Akuffo, at the Special Chamber of ITLOS in Hamburg, Germany.

Ms Akuffo led Ghana’s team to show cause why the existing maritime boundary must be maintained, while the Ivorian team was led by a former Minister of Petroleum in Cote d’Ivoire, Mr Adama Toungara.

Ms Akuffo, on Monday, February 13, 2017, officially ended Ghana’s oral arguments and asked the tribunal “to reject Cote d’Ivoire’s attempts to argue that an oil field built up and developed over decades should have been abandoned overnight in 2009 when Cote d’Ivoire decided that a different boundary would suit it better. The cynicism here is all that of Cote d’Ivoire, I am afraid to say, not of Ghana”.

She prayed the Special Chamber to apply well-established legal principles to a clear and consistent body of evidence.

Ghana is accordingly praying the Special Chamber to declare that Ghana and Cote d’Ivoire mutually recognised, agreed and applied an equidistance-based maritime boundary in the territorial sea, EEZ and continental shelf within 200 miles.

Ghana is pleading with the Chamber to hold that the maritime boundary in the continental shelf beyond 200 miles follows an extended equidistance boundary along the same azimuth as the boundary within 200 miles to be the limit of the national jurisdiction.

Further to that, Ghana wants the Special Chamber to hold that Cote d’Ivoire was, in accordance with international law, being stopped from objecting to the agreed maritime boundary.

Another order being sought by Ghana is a declaration that “the land boundary terminus and starting point for the agreed maritime boundary is at Boundary Pillar 55”.

Making a case for Cote d’Ivoire, Mr Toungara told the tribunal to reject Ghana’s requests and claims and rather declare and adjudge that the sole maritime boundary between Ghana and Cote d’Ivoire follows 168.7 degrees azimuth line, which starts at BP 55 and extends to the outer limit of the Ivorian continental shelf.

Cote d’Ivoire is also urging the tribunal to hold that Ghana’s unilateral activities in the Ivorian maritime area constitute a violation of the exclusive rights of Cote d’Ivoire over its continental shelf, as well as its obligation to negotiate in good faith.