Dr Papa Kwesi Nduom, the President of Groupe Nduom, has said the high interest rates are as a result of the “insane competition” among financial institutions.

He said the competition kept pushing the interest rates very high when, in reality, the rates should be coming down and urged them to act accordingly to regulate it.

“Industry players must realise the dangers of the insane competition and talk to people and among themselves in the capital market, investment and so on. It is a crusade that every industry player must push. We should also teach our customers that it is in their own safety that the rates are brought down,” he said.

Dr Nduom said this at a forum organised by Gropue Nduom (GN) for rural banks in the Western and Central regions with the aim of forging a stronger partnership for mutual profit.

The forum was also to expose the rural banks to the available products offered by GN and to explain to them how they could take advantage to solve their liquidity issues and challenges to raise money to meet their financial objectives.

According to him, many financial institutions had collapsed over the years due to the high interest rates charged.

He noted that in other jurisdictions, interest rates were regulated and, therefore, no institution could charge high rates because that would not be a safe financial practice, but same could not be said about Ghana.

Dr Nduom said the GN was seeking to forge a stronger partnership with the rural banks in the areas of Bancassurance, Mobile Money and Fund Management, among other things, to offer them better opportunities to earn income aside their normal banking activities.

He said although the Rural Banking Concept was a brilliant idea, it had not received the support it deserved to stand on its own to achieve the objective for its establishment.

He said it was against that backdrop that GN decided to seek partnership with them to help solve some of their challenges to make them compete favourably to deepen the financial system in Ghana. 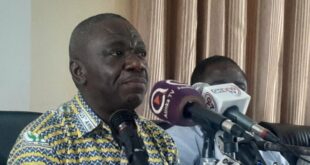 Dr Emmanuel Tinkorang, the Ashanti Regional Director of Health Services, has said that it is …