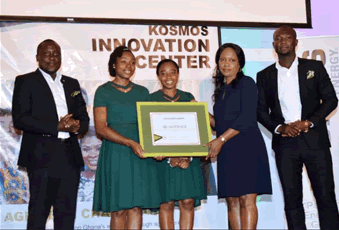 It also provided sponsorship for a 12-month incubation at the Meltwater School of Entrepreneurs and Technology (MEST) for the two top winner and third one, CompleteFarmer.

CompleteFarmer, which provides agribusiness solutions services for an identified niche market of individuals through practical, personalised and customised farming experience, also received seed funding of $50,000 from Premium Bank, one of the partners for the KIC Agritech Challenge.

Six out of 25 teams who pitched ideas in the KIC Agritech Challenge emerged as winners and received business packages from KOSMOS and its partners.

The winners were announced at a ceremony in Accra on Thursday.

Unlimited, which provides simple livestock management software called AniTrack, to identify and track the health status of individual livestock, will receive seed funding and incubation support sponsored by MEST, while the remaining two teams, AgroSeal and Rent-a-farm, will receive other business packages including partnerships with other teams.

The award winners of the challenge, an initiative by KOSMOS to create a new breed of young entrepreneurs to accelerate Ghana’s economic growth, expressed their gratitude to KOSMOS and its partners for the award and pledged to excel in their businesses.

Ms Jennifer-Jayne Asante, the Chief Operations Officer of QualiTrace, said she and her colleagues in the 2017 cohort of the programme, were committed to help boost the agriculture sector in Ghana.

In an interview with the Ghana News Agency, Ms Asante said the KIC programme had enlightened them on Technology and Agriculture, leading to the birth of their company.

She said the initiative had given her the opportunity to understand the scope of technology and agriculture and how best to merge the two to make them more profitable for the country.

“The KIC programme helps you to unleash the skills that were hiding in you.”

She said there is the need to promote food safety, a green environment and healthy agricultural produce in Ghana hence the company’s focus on authenticating agro-chemical inputs, specifically, crop protection products.

“What we have is software that allows farmers to independently verify agricultural produce by just using their phones to do the verification,” Ms Asante said, adding that, it would also assist companies to protect their brand identities.

She congratulated her colleagues for going through the programme successfully and expressed gratitude to KOSMOS Energy for assisting her to unleash her inner skills saying the award was going to help them bring their product to the market.

On his part, Mr Kelvin Ashie, the Chief Product Officer and Lead in Charge of Business Development of the AgriInnova, said they were focusing on the poultry industry to help farmers track the progress of their farms at all times.

Mr Ashie said: “For a long time the Ghanaian poultry industry has been left in chaos and through the research sponsored by KIC programme, we realised that poultry farmers had pressing needs due to cost of production.”

He said their company, AgriInnova, was piloting a flagship project called “Akukor-ntakra”, to help farmers track their farms on and off-site and also assist them in data gathering to increase efficiency.

He said through the KIC Agritech Challenge, the company had established relationships with major stakeholders in the sector, especially the Ghana Poultry project.

Mr Ashie said the $50,000 capital received would assist them to scale up the company’s operations throughout the country, especially in the areas noted for poultry production, since they were currently carrying out a pilot project.

He described the KIC challenge as very helpful as it had brought together various skill sets for networking.

Mr Ashie called on the government to partner KOSMOS Energy to continue rolling out the initiative to help more youth in the country to gain employment.

The KIC Agritech Challenge, a social investment and business development programme powered by KOSMOS Energy. The programme is accomplished with a three-pronged approach namely, collaboration incubation and acceleration.

Launched on March 6, 2016, the challenge is in its second year, with applications for the third edition starting in September 2017. To ensure the effective implementation of the programme, KOSMOS had formed key partnerships with the Meltwater Entrepreneurial School of Technology, which incubates young entrepreneurs.

Application for the 2018 edition was also launched at the event, with a call on the youth to visit the company’s website to apply for selection.