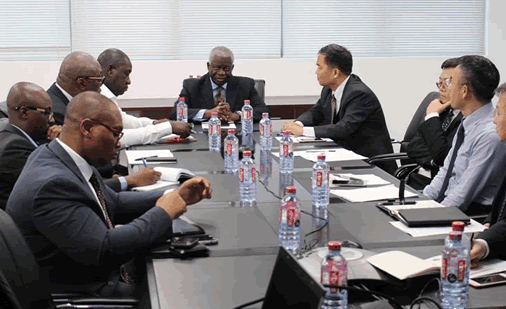 The working visit afforded Mr Song and Mr Oware the opportunity to discuss the 200MW solar generation farm to be constructed by Sinohydro at Bui.

It would be constructed under a Build, Operate and Transfer (BOT) agreement between BPA and Sinohydro.

The discussions also bothered on collaborating with BPA to develop hydropower potential on the Western Rivers.

BPA has already completed the expansion works on the Bui Switchyard to be able to evacuate the solar power generated from the solar farm to be located within the Bui environ.

The construction of another 50MW solar power generation plant at Bui had already been awarded to another company.

Speaking to the Ghana News Agency after the meeting, Mr Oware said the construction of the solar farm was likely to begin somewhere this year and hopefully, by the close of next year, it would be generating electricity.

He said upon the completion of the solar generation project; BPA hybrid generation capacity of solar and hydro would be 650MW.

Mr Song said there was very good cooperation between Ghana and China, and that PowerChina and Sinohydro were willing to invest more in Ghana’s economic development.

He said construction works on the 200MW solar generation project would begin next year; adding that PowerChina would be investing about four billion dollars in different modules in Ghana.

Mr Song, who is on official visit to Ghana, would be holding talks with government officials in the energy sector.