Malta and Ghana to increase cooperation

July 26, 2017 General News Comments Off on Malta and Ghana to increase cooperation 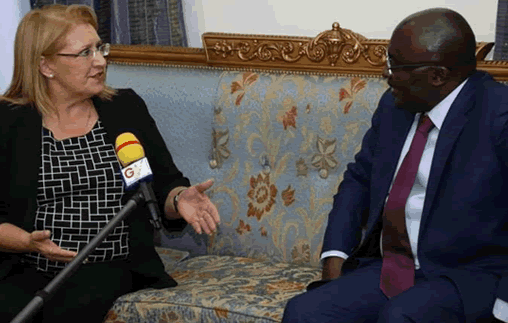 She was met on arrival at the Kotoka International Airport by Vice President Dr Mahamudu Bawumia.

Mrs Coleiro Preca, who was accompanied by her husband Edgar Preca, will call on President Nana Addo Dankwa Akufo-Addo at the Flagstaff House where both leaders would hold talks on the strengthening of bilateral relations between their countries.

Ghana and Malta would, after a roundtable discussion at the Presidency, sign a Memorandum of Understanding.

The Maltese President is leading a delegation of business people looking to explore opportunities for investment in Africa.

Vice President Bawumia, in a discussion after Mrs Preca’s arrival, told her that Ghana was looking to strengthening bilateral ties with Malta, assuring that the country had the right climate for doing business in the sub-region.

Espousing Ghana’s credentials as a beacon of democracy, peace and stability in the ECOWAS region, the Vice President said the country was on the path of development and was opened for business.

Mrs Preca, on her part, said her country was also looking to strengthening existing ties with Ghana.

She and her spouse would also visit Kumasi on Thursday, July 27, where she is expected to pay a call on the Asantehene, Otumfuo Osei Tutu II, at the Manhyia Palace, and the Hope X Change Medical Centre, an 80-bed hospital initiated by Malta.

She would also join her husband, Edgar, to watch a football match between Accra Academy and the National Under 17 Team at the Asamoah Djan Sports Complex.

Before the match, Mr Preca would hold discussions with the Minister of Youth and Sports, Mr Isaac Asiamah, and some stakeholders in the sports industry.

Ghana is the first country in, recent times, to invite a sitting Maltese President for a visit.

President Preca departs Accra to her country on Friday, July 29.