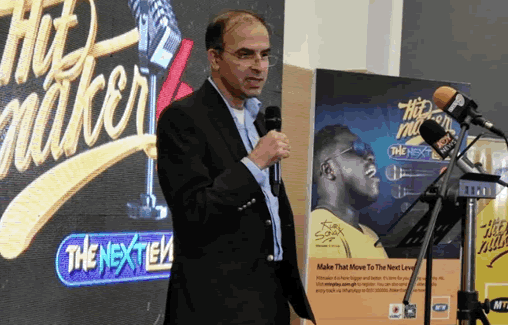 The MTN Hitmaker show is aimed at giving authentic, talented and potential singers and rappers a platform to build upon themselves and be ready for the music industry.

Speaking at the launch of the show at the MTN Head Office in Accra, Mr Asher Khan, the Chief Marketing Officer, MTN Ghana, said the show discovers, nurture and create opportunities for up and coming musicians.

He said MTN had brightened the lives of several unsung musicians and their audiences through the Hitmaker show, stating winners of previous seasons namely; Naterial, Koo Ntajra, Togbe, Kidi and Kelvin for season one to five respectively.

He said these Hitmakers had made significant progress as a result of the GH¢100,000.00 cash award for the launch of their album career – including recording, music video production and promotion of their song.

Mr Khan said the vision to lead the delivery of a bold new digital world would also be reflected in the edition of the hit maker by making use of powerful digital platforms like MTN play and Video+ to search for the talent and showcase them.

This, he said, would make the mechanics for submitting a demo simple, fast, convenient and fun as well as provide more visibility and more chances of interactions for fans.

The launch witnessed performances from Kelvin and Kwame Eugene and was graced by personalities from the entertainment industry and the winners of the preceding editions.