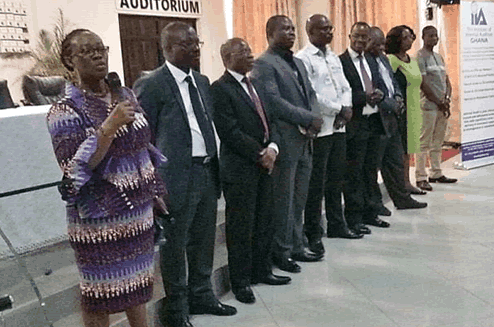 The Institute of Internal Auditors (IIA) Ghana on Thursday elected Mrs Juliet Aboagye-Wiafe, the former Vice President, as the new President of its 2017-2019 Governing Council at the Annual General Meeting in Accra.

Together with Mr Daniel Quampah, the new Vice President, and seven officers, the nine-member Council is expected to facilitate the smooth running of the Institute which is dedicated to the promotion and development of the practice of internal auditing in Ghana.

The new President expressed the Council’s appreciation to the Institute stating that their election indicated the trust and confidence members had in their abilities to deliver, and promised not to disappoint them.

Mrs Aboagye-Wiafe observed that the internal committees instituted by the IIA Ghana had remained dormant for too long and renewed the Council’s commitment to ensure that the committees would perform the functions for which they were set up.

She pledged to ensure close collaboration with senior auditors to assist the Council run its affairs to promote internal audit practice in the country.

Mr Richard Ntim, the immediate past president of the outgone council, was appreciative of the opportunity given to him and his team to serve the Institute for the past couple of years and entreated the newly constituted council to continue in the advocacy drive to create awareness of the work that internal auditors do.

He said there were some erroneous notion that internal auditors were ‘policing’ organisations just to find faults inherent in their operations, which he said, affected the working relationship and consequently their recommendations.

Mr Ntim said the aim of internal audit was to “identify lapses, inefficiencies, weaknesses, and risks associated in the work we do in organisations and things that can prevent management from achieving organisational objectives.”

He added that internal auditing went beyond financial, as people usually thought, to encompass various issues that could forestall organisational growth including; judicious utilisation of available resources.

He said when people understand the role they play and appreciate their work, they would have a better collaboration with their stakeholders so that they could do their work better.

Meanwhile, the Institute, according to him, has commenced the initiative to gain recognition from the government.

The election of the new Governing Council of the IIA Ghana had been preceded by the ratification of proposals for amendment of the Institute’s constitution which was critical to the present election.

The amendment had been necessitated by the need to address observed lapses in the constitution concerning council members’ tenure of office and other pertinent issues.

Included in the approved proposal were key considerations of the length of term of office for Council members, which had to conform with the global tenure of office to create a requisite turnover of council members, strengthening the capabilities of members to facilitate succession planning as well as creating a ‘pool of professionals’ abreast of the workings of the internal audit globally.

Currently, the IIA Ghana has a membership of over a thousand internal auditors with Ghana representing the West African sub-region on the governing council of the African Federation of Institutes of Internal Audit (AFIIA).