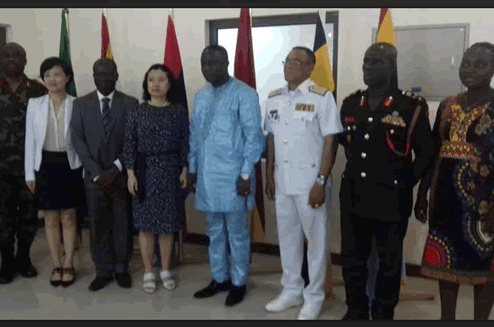 China, on Thursday, signed a Memorandum of Understanding (MoU) with Ghana, for the provision of a 50 million Chinese Yuan Renminbi aid to the Ghana Armed Forces to execute its mandate effectively.

The Chinese Ambassador to Ghana, Madam Sun Baohong, signed on behalf of the Ministry of National Defence of the People’s Republic of China, while the Minister of Defence, Mr Dominic Nitiwul, initialled for the Ministry of Defence.

Under the agreement, the Asian giant would provide financial aid and logistics to the Forces more viable in international peacekeeping and regional security.

The deal is in fulfilment of a promise made by the Chinese Government during Vice President Mahamudu Bawumia’s recent visit to that country.

Commenting on the agreement, Madam Sun said it formed part of China’s efforts to deepen her already good bilateral ties with Ghana, especially in the area of security.

Madam Sun said Ghana continued to perform well in international peacekeeping, therefore, it was only appropriate for her Government to support Ghana to continue with the good work.

The Chinese Ambassador congratulated Vice President Bawumia for a successful trip to China and urged the Government to ensure that the $15 billion worth of financial package was duly delivered and used successfully towards the implementation of all the projects outlined by the Government to improve the standard of living of Ghanaians.

“We need to implement the follow-up actions of this visit and the MoU is the first step in fulfilling that promise,” she added.

Mr Nitiwul commended the Chinese Government for the continuous support and pledged the commitment of the Ministry towards ensuring the successful usage of the grant towards making the Armed Forces better and stronger.

He said China was in the process of shipping four patrol boats, which were pledged last year for the Ghana Navy, and they were expected to arrive by the end of the month.

“Six people would also be sent to China to be trained on how to use the boats,” he added.

He said the Chinese Government was offering 28 full scholarships to some military men and women to go and study in China in the areas of Security and Defence.

“The beneficiaries would be drawn from the Navy, Army and the Air Forces,” he said.

The selection would be done using appropriate procedures,” the Minister said.

China has also pledged 100 Million Chinese Yuan Renminbi towards cushioning the Ghana Police Service to make it deliver on its mandate effectively.