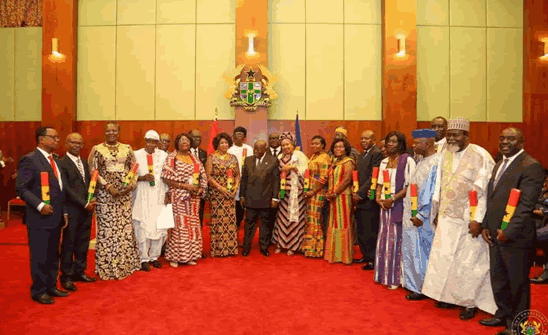 Dr Mahama who contested the presidential election of 2016 on the ticket of the People’s National Convention, was presented with credentials as Ghana’s Ambassador-at-Large, making him a highly ranked diplomat, limited to no country, but assigned to represent the country internationally, who would also advise and assist government on both local and international issues.

They swore the oath of allegiance, secrecy and the official oath.

President Akufo-Addo congratulated them on their well-deserved appointments, and entreated the envoys to safeguard, protect and promote the high image of Ghana at all times.

He said the Ambassadors, who had been carefully chosen for their assignments, had distinguished themselves in their various fields of endeavour in the public service of the country, adding “You are eminently fit to represent Ghana in your respective places of accreditation, which have expressed satisfaction with your appointments.”

The President reminded them that they were the most visible symbol of Ghana’s esteemed standing as the beacon of democracy on the continent, saying “In all your actions you  must guard jealously our country’s image….I am confident it is a charge you would uphold.”

He said they had the onerous responsibility to preserve and promote the image of Ghana, whose reputation amongst the comity of nations was high, and to promote Ghana’s commercial interest to the respective countries they have been assigned.

He further asked them to work to ensure that the needed investment was generated to drive governments economic development drive, particularly, the ‘one-district-one factory’, ‘one village-one dam’, ‘planting for food and jobs’.

“We are determined to create the appropriate macro-economic environment which wouldl attract domestic and foreign investments into sectors of our economy. You have to help in that exercise,” he said.

President Akufo-Addo advised them to develop cordial working relations with the professional Foreign Service officers at their duty post, and draw on their invaluable experience and knowledge to enable them work effectively.

He also asked them to maintain a good rapport with the Ghanaian communities to further their prospects of success in their assignments, saying “They will be counting and looking up to you to champion not only Ghana’s interest but theirs as well …do your best not to disappoint them.”

Mr Ayikoo Otoo, on behalf of his colleagues, thanked the President for vesting confidence in them and giving them the opportunity to represent Ghana, and gave the assurance that they would deliver on their mandate.