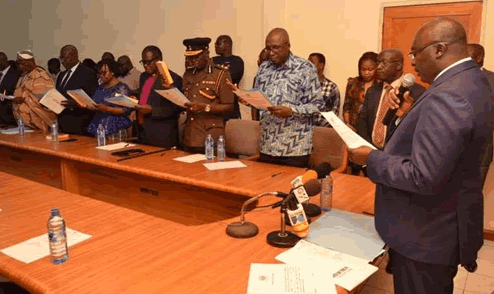 Government has given approval to the Ghana Prison Service to recruit 1,000 prison officers to enhance its performance so as to meet the international best practices in prison administration.

Vice President Dr Mahamudu Bawumia made the disclosure in Accra on Tuesday at the inauguration of a 13-member Governing Council of the Ghana Prisons Council.

He urged the Council members to offer their skills and expertise so as to recruit the right calibre of personnel to the expected standards.

He said as a result of the poor ratio of prison personnel to inmates it had affected the performance of the Service and, thus, falling below the required international standards.

Vice President Bawumia said all over the world the philosophy of prisons was changing from being mere custodians of inmates to rehabilitation so that they would be reformed and re-integrated back into society as nation builders instead of nation wreckers.

However, he said, the prison facilities in the country was not in the best condition to offer the needed training.

He noted that apart from the Nsawam Medium Security Prisons and Nkaful Maximum Security Prisons that had recently received some facelift, the country’s prison facilities had not seen much infrastructure expansion and rehabilitation since the colonial days to offer the best training to inmates.

He said with the growth in the country’s population from six million at the time of independence to about 27 million currently, there was corresponding increase in crime and deviant behaviours.

He, therefore, said there was the need to expand the prison infrastructure with modern facilities, rehabilitation tools and trained personnel to manage the situation for better outputs.

“Our prison facilities are inhumane, overpopulated and riddled with attendant threat of outbreak of diseases, negative survival behaviours and human rights abuses.

“The issue of human rights is of much concern to the Government, we should remember that although inmates are confined as prisoners let us not forget they have rights which should not be taken for granted,” he noted.

Vice President Bawumia charged the Council to adopt public-private partnerships in building new prison facilities and relocation of old ones to appropriate locations.

He urged them to endeavour to offer modern methods and professional training and re-training to the prisons personnel as well as engaging in foreign missions and exchange programmes in order to build their capacities for the reformation and re-integration exercise.

He urged the Prison Service to rebrand itself with diligence and professionalism so that the public would have trust and confidence in the Prison Administration.

Vice President Bawumia expressed optimism that the new Council, with the support of the Government, would end the record of poor prison facilities by writing the wrongs to meet the required standards.

He expressed delight over the achievements made so far by the Justice for All Programme, which had helped in decongesting the country’s prisons.

Vice President Bawumia, on behalf of the President, expressed gratitude to members for accepting the offer to serve on the Council, saying; “You were selected based on your vast experiences, skills and expertise”.

Rev. Dr Kwabena Opuni-Frimpong, the General Secretary of the Christian Council of Ghana, and member of the Council, on behalf of the members, thanked the President for the confidence reposed in them and gave the assurance that they would work diligently to meet their mandate.

He said the Council was aware of the Efiase Project initiated by the previous administration and gave the assurance that the Council would give it a new face to meet the set objectives.

He pledged to ensure that the Prison Service got the necessary facilities to provide the required services for the rehabilitation of the inmates and re-integration into the society.

Chapter 16 of the 1992 Constitution established the Prison Service and mandates it as the custodian, rehabilitation and re-integration of prisoners.