Courts discharge eight remand prisoners under Justice for All Programme

July 9, 2017 General News Comments Off on Courts discharge eight remand prisoners under Justice for All Programme 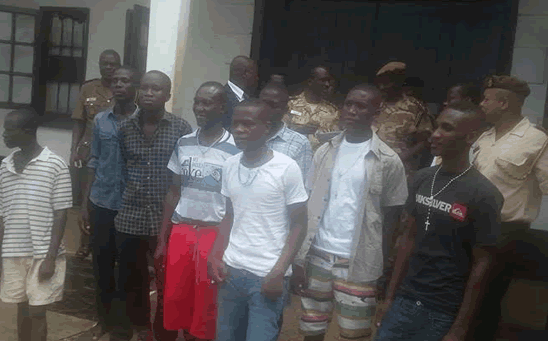 Eight remand prisoners at the Akuse Local Prison in the Eastern Region have been discharged, after two Courts sat on their cases, under the Justice for All Programme.

In all 41 cases were heard, with eight applicants discharged, 14 inmates granted bail, 16 refused bail whilst three persons had their applications struck out because their cases were still pending at the Court for trial.

The accused persons had been in prison custody from five months to four years for various crimes, including murder, rape, stealing and illegal possession of narcotic substances.

The Justice for All Programme established in 2007 seeks to alleviate overcrowding in various prisons by setting up special courts to adjudicate remand prisoner cases throughout the country with the joint efforts of the Judicial Service of Ghana, the office of the Attorney-General, the Ghana Prisons and the Ghana Police Service, and Civil Society.

Justice Clemence Honyenuga, a Judge at the Court of Appeal, and the Chairman of the Justice for All Programme, told the Ghana News Agency (GNA) that the programme was in its tenth year and had dealt with 3427 inmates of which 688 were discharged, 1077 were granted bail and 138 were convicted and sentenced.

He appealed to the Attorney General and Minister of Justice and the Minister of the Interior to implement the non-custodial sentencing policy to help decongest the prisons to improve conditions.

He said this would however call for the amendment of Criminal Procedure Act 30 and also salvage the state monies spent on convicts who were convicted and sentenced on minor offences.

Mr Jonathan Osei-Owusu, the Chief Executive Director of POS Foundation, an NGO for human right advocacy that facilitates and coordinates the Justice for All Programme, said the NGO served as a legal aid for the remand prisoners by providing paralegals and lawyers to represent them during the sitting.

He said a survey conducted by the foundation revealed that most prisoners in the country had skin diseases and bodily pains and it had over the years screened the prisoners and provided medications.

Mr Edward Fiifi Acquah, the Assistant Director of the Akuse Prisons, commended the Attorney General’s Department and stakeholders for the exercise, stressing that it would help decongest the prisons.

Mr Elvis Tetteh, a 24 year-old man who was discharged and spoke in an interview with the GNA urged the youth to be cautious of their lives and stay out of trouble in their communities.

Madam Sala Ouedraogo, the Founder of BAF Ghana International said the medications would enable the inmates to access primary healthcare.

The Akuse Local Prison was built in 1911 to accommodate 90 inmates, but ended up accommodating more than 210 inmates thus stretching the facilities in the prison.