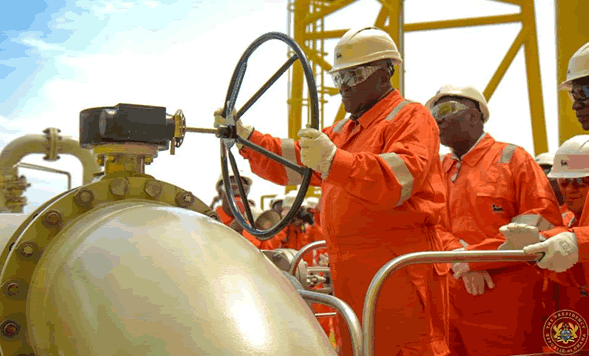 President Nana Addo Dankwa Akufo-Addo, on Thursday, stated that his Government would strive to ensure that Ghana becomes the petroleum hub in the sub-region.

The Government would, therefore, pursue its vision to establish a thriving petrochemical industry to guarantee sufficient, reliable and affordable clean energy for power generation and supply to support economic activities, and keep the country on the right path to desired growth.

The President was addressing a durbar after turning on the valves on the Floating Production Storage and Offloading Vessel (FPSO) John Agyekum Kufuor to signal the formal production of oil in commercial quantities from the Sankofa oil and gas fields in the Cape Three Points.

The symbolic ceremony was done offshore by the President turning the production valve of the FPSO and opening a Subsea Well Choke.

Major stakeholders in the oil and gas industry, public officials and traditional leaders in the Western Region attended the durbar with their people.

President Akufo-Addo said the attainment of the feat had been made possible by the consistent implementation of sector-related policies and programmes aimed at creating the right business and investment climate to ensure the rapid and continuous development of the sector.

“It has been ten years since Ghana made the historic discovery of oil and gas as a result of the bold and farsighted policies of the Kufuor-led NPP Government,” he recalled.

“The then President played a truly seminal role in the development of the nation’s oil and gas industry, and it is, thus, befitting to have the OCTP FPSO christened in his honour.

“Indeed, the decision to restructure and reorganise the operations of GNPC to make the Corporation focus on its core mandate of exploring for oil and gas, and creating an enabling climate, positively changed the operating environment.”

The President said it was the expectation of the Government and Ghanaians that the Offshore Cape Three Point (OCTP) partners would ensure the prudent management of the Sankofa oil and gas project to achieve cost efficiency, as this was the only way low gas prices could be guaranteed, and, eventually, low electricity tariffs to stimulate development.

“With the addition of the production from the OCTP to those of the T.E.N and Jubilee fields, we are optimistic that our beloved nation will enhance significantly its gas supply for our domestic power generation,” the President said.

President Akufo-Addo said the Government would collaborate with other licensees and contractors to ensure that the petroleum resources were exploited in a sustainable manner for the benefit of the people of Ghana.

“The need for creative thinking to leverage our oil and gas production for national development is a charge for us to keep – and we must not fail our people,” he emphasised.

“Ghanaians have the spirit of entrepreneurship, and it is vital that they are empowered to engineer business growth, and reduce the serious unemployment situation in the country.

“It is gratifying to see, this morning, our young Ghanaians on the FPSO, trained to manage the hydrocarbon production and processing from the Field as technicians and supervisors. I have been informed by the Petroleum Commission that over 100 Ghanaians, representing nearly 60 percent, are involved in the operation and maintenance of the FPSO John Agyekum Kufuor.”

This number, he explained, was in addition to the many that worked in the conversion of the facility in Singapore, adding that: “I saw them on the vessel, and salute them for their energy, enthusiasm and commitment. They are excellent examples of Ghanaian youth.

“Indeed, more than $1.8 billion worth of contracts have been awarded to indigenous Ghanaian companies under this project.”

President Akufo-Addo, thus, urged ENI and its partners to continue to work with the Petroleum Commission to move Ghanaian participation to even greater heights.

Additionally, the second phase of the Sankofa project would rely on the support services of small and medium enterprises (SMEs) as part of the supply chain development, thereby creating opportunities for new and existing businesses, he said.

“In particular, for those engaged in farming and fishing, this project presents a great opportunity to a new market, as many people employed under this project will need to be fed,” he noted.

He urged the youth to go into farming under our Planting for Food and Jobs Programme, and other activities to take advantage of the opportunity presented.

The Sankofa project, and other existing ones in the Western Region, the President expressed confidence, “will open up the region for infrastructural development and consequent economic growth.

“This is in line with the grand plan of making the Western Region a key growth pole for the country.”