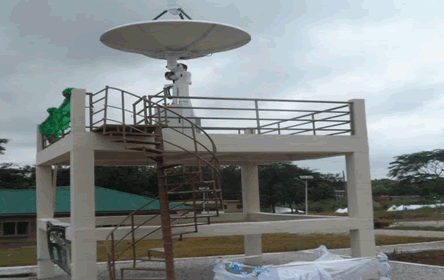 The Earth Observation Research and Innovation Centre (EORIC) of the University of Energy and Natural Resources (UENR) has inaugurated a $1.2 million worth COSMIC-2 Satellite Ground Station (GS) on Tuesday at the Sunyani campus of the institution.

The GS, funded by the United States of America (USA) National Oceanic and Atmospheric Administration (NOAA) and the Taiwan National Space Organisation (NSPO) is for weather monitoring in the Tropics and it could predict or forecast weather for four days ahead.

It is the only one in Africa and among eight others in Taiwan, Guam, Hawaii, Honduras, Brazil, Kuwait, Mauritius and Australia “to receive improved atmospheric data that promises to increase weather forecast skill”.

Mr Richard Ullman, COSMIC-2 Programme Manager from NOAA explained COSMIC as “Constellation Observing System for Meteorology, Ionosphere and Climate”, saying it was a joint partnership programme between the USA and the Taiwan NSPO.

“The NSPO would be operating a spacecraft, FORMOSAT-7 from their command station in Taiwan and the United States is responsible for organising the international partnership of ground stations”, he said.

Mr Ullman said the USA and Taiwan programme began with COSMIC-1/FORMOSAT-3 launched in April 2006 and a decade later, COSMIC-2/FORMOSAT-7 is an improved version with special focus on the tropics.

The COSMIC-2, he added consisted of a set of six satellites that would collect temperature, moisture and ionospheric information over the tropical regions worldwide by measuring the refraction of radio waves through the atmosphere.

He indicated “the COSMIC-2 system will make as many as 6000 of these profiles everyday “and added that  everyday over 600 of the profiles would  be brought down to earth at the GS.

Mr Ullman explained UENR was selected among other factors because of its geographical location and the existence of EORIC  and the inroads being made in its operational activities.

Dr Amos T. Kabo-bah, the head of the EORIC expressed the trust that the Centre  could help Ghana and Africa to leverage both “in-situ and satellite data” for improving decision-making in the areas of health, agriculture, ecosystems, climate, disasters, weather and Biodiversity.

He announced that they had been able to host a recently ended second international  Africa Global Earth Observation System of Systems (AfriGEOSS) symposium, the Centre was on its roadmap to becoming a Centre for Excellence for supporting Ghana in its “One-District, One Factory” initiative, the African continents “Agenda 2063”and the African Union’s “Space Policy and Strategy”.

Professor Harrison Kwame Dapaah, the Vice-Chancellor said the Centre had both physical infrastructural and other necessary challenges as it was in dire need of a building, good and fast internet access, an electric generator as well as funding for research activities and additional staff because of the COSMIC-2 project and several others.