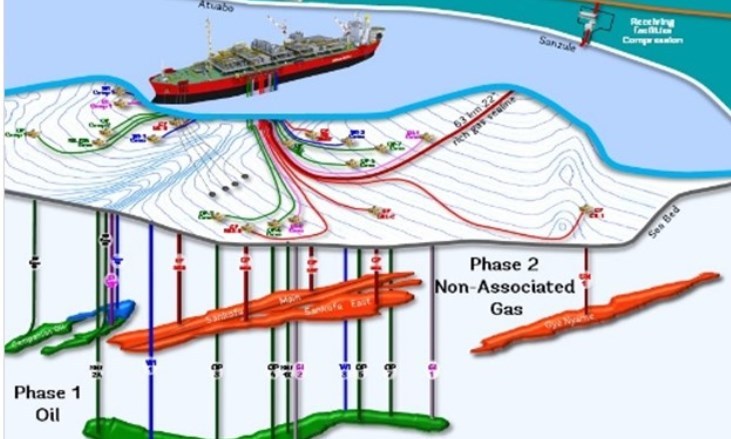 The symbolic ceremony was done offshore by the President turning the production valve of the FPSO and opening a Subsea Well Choke.

A durbar of chiefs, government officials and other dignitaries is following the commissioning at the Takoradi Shore base in the Western Region.

The Ministry of Energy in a statement to the Ghana News Agency, earlier, said: “Eni is the operator of the OCTP block with a 44.44 per cent stake, while Vitol holds 35.56 per cent and Ghana National Petroleum Corporation (GNPC) 20 per cent.”

“The OCTP integrated oil and gas development is made up of the Sankofa Main, Sankofa East and Gye-Nyame fields, which are located about 60 kilometers off Ghana’s Western Region coast.”

It said the fields would produce altogether 45,000 BOPD of oil and 170MMSCFD through 18 wells, using the floating production, storage and offloading unit (FPSO) John Agyekum Kufuor.

It said a 63-kilometer submarine pipeline would transport gas to Sanzule’s Onshore Receiving Facilities (ORF), where it would be received and transmitted for power generation.

The OCTP Project had achieved significant local content development and participation with the fabrication of module stools, risers, jumpers, among others, in Ghana, it said.

Mr Peter Kwamena Bartels, the Board Chairman of GOIL Company Limited, has said for the …