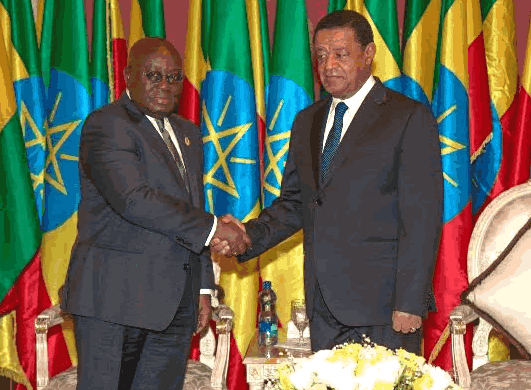 Ghana and Ethiopia have committed to strengthening the ties of co-operation that exist between them.

At the end of a meeting on Tuesday between President Nana Addo Dankwa Akufo-Addo and Ethiopian President Mulatu Teshome and on the sidelines of the ongoing 29th African Union in Addis Ababa, Ethiopia, both leaders expressed satisfaction with the current state of the relations between them.

President Akufo-Addo had paid a courtesy call on the Ethiopian President at the Presidential Palace.

President Teshome noted that the history of cordial relations between the two countries dated several years back with the first two leaders of Ghana and Ethiopia, Dr Kwame Nkrumah and Emperor Haile Selassie respectively, playing an instrumental role in the de-colonisation of Africa and the strengthening of the Pan-African institutions.

He expressed the opinion that that history “encourages us to do more and also allows us to strengthen the bilateral relations between our two countries. We need to deepen the ties between Ghana and Ethiopia in the areas of trade, investment and education, and we need to visit each other often.”

President Teshome said: “Economic diplomacy is now the pillar of relations between countries,” and was hopeful that under his and the Presidency of Nana Akufo-Addo, the bonds of friendship and the ties of co-operation that existed between the two countries would be strengthened even further.

He said it was of the utmost importance that the two countries learned from each other and adopted best practices from their two countries in order to create wealth and prosperity for their peoples.

President Akufo-Addo thanked his Ethiopian counterpart for the welcome accorded him and his delegation.

He said Ghana’s relations with Ethiopia predated the post-independence era, as many Ghanaians, who enlisted in the then Gold Coast Regiment of the Royal West African Frontier Force (British Colonial Force), fought side-by-side with Ethiopian resistance forces in World War II.

Whilst acknowledging the significant economic growth rates chalked by Ethiopia, President Akufo-Addo commended President Teshome for the rapid infrastructural development taking place in that country adding that this would spur further growth in Ethiopia.

The two countries, President Akufo-Addo said, would have to increase the volumes of trade between them and also deepen co-operation in the area of agriculture and its modernisation.

He commended successive governments and the people of Ethiopia for hosting the institutions of the African Union for the last 54 years, expressing confidence that Africa would soon show concrete expression of its appreciation to Ethiopia for this gesture.