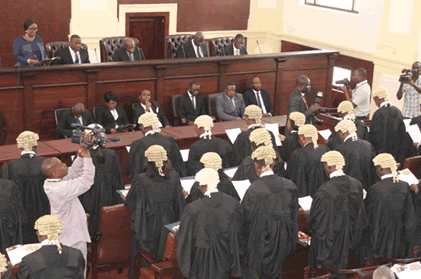 A Retired Professor in Law and Financial Accounting, John Bright Kobla Aheto has asked lawyers to minimize their exposure to corruption risks in the discharge of their duties.

He said corruption threats pervaded the legal profession which needed prudent anti-corruption strategies to nib it in the bud.

Prof Aheto, who is also a Part-Time Lecturer at GIMPA and the Pentecost University in Accra, was delivering a lecture on the topic,” Financial Integrity, Honesty, Professional Diligence: The Role of the Legal Profession against Corruption”  in the Sekondi/Takoradi Metropolis.

The lecture which was attended by lawyers, members of the bar and bench, and the media, formed part of the 35th commemoration of the three High Court judges who were murdered in 1982 in the discharge of their sacred and professional duties.

Prof Aheto stressed the need to raise the awareness among lawyers and the Ghana Bar Association (GBA) to make corruption unattractive to the profession.

He identified petty corruption to have taken centre stage in the country and other areas when public officials met in places such as registration offices, police stations among other private and government sectors.

Prof Aheto said in most countries, the legislature, executive and judiciary were independent from one another which had the potential to mitigate grand corruption.

Touching on systemic corruption, he pointed out that “there were weaknesses in the system such as conflicting incentives, discretionary and monopolistic powers, low remuneration, lack of transparency and culture of impunity”.

Prof. Aheto outlined fertile grounds for corruption as bribery and kick-backs, economic extortion, during the award of contracts, conflict of interest and illegal gratuities.

He noted with concern that “corruption had become endemic in society from the public sector to family setting”.

For his part, Justice Peter Ababio a High Court Judge entreated lawyers to be careful when transacting business with clients.

He advised lawyers to interview all the complainants to ascertain the truth of their cases before adjudication starts.

Justice Ababio reminded them to abide by the scale of fees by the Ghana Legal Council to avoid the temptation of charging higher and open their eyes on the claims of money before in order not to branded as corrupt.

President of the Western Regional Judicial Service, Mr Kofi Diaba appealed to lawyers to be professional in the execution of cases.

He advised them not to allow money to lure them away to misconduct themselves and bring the name of the service into disrepute.

Mr Diaba admitted that corruption usually emanated from the clients who lured the service and urged lawyers to shun all forms of corrupt practices,