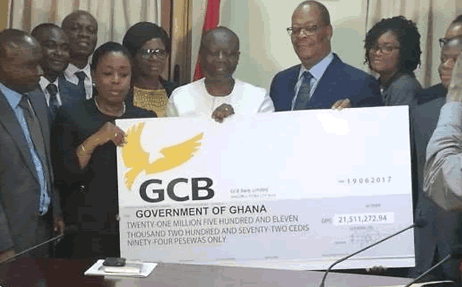 GCB Bank Limited, has presented GH¢21.5 million to the Government as dividend for 2016.

The dividend is in respect of the 21.4 per cent government’s shareholding in the bank.

Mr Ken Ofori-Atta, Finance Minister, who received the cheque from the, Managing Director Anselm Ray Sowah, described the consistent payment of dividend by GCB to government as “the best one”.

He underscored the consistent and important role that GCB played in the country’s economic development and urged them to do a lot more.

Mr Ofori-Atta said GCB had a very significant role to play in all the government initiatives to grow the economy and create jobs as well as to cut down on migration from the rural areas to the city centres.

He said government would find ways to give more opportunities to the bank to ensure that it remained profitable to contribute to the economy.

“GCB is a vanguard for transformation and there is the need that it is strengthened further,” he said.

He commended the bank’s commitment to support government’s one district one factory agenda with one billion cedis.

The Minister urged the bank’s management to consider the importance of leveraging technology, especially the payment system, in advancing their cause to become a giant in the financial services industry.