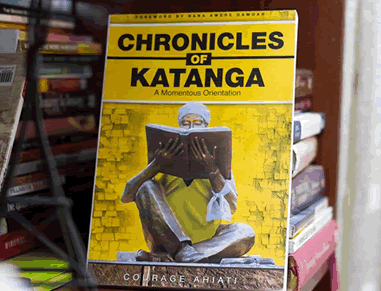 While his colleague senior high school graduates were pining over their preferred universities and programmes of choice, Courage Ahiati was worried by something else. Growing up, he had been sensitized to many valiant stories about one of the halls of residence on the campus of the Kwame Nkrumah University of Science and Technology (KNUST), Kumasi –Ghana. Therefore, when the time was due for him to buy university forms, he bought KNUST forms with just one hall in mind. But destiny would eventually honour his wish. On the 17th day of August 2007, he finally was admitted into the famous University Hall (Katanga), where he spent three of his four-year university life, since that good day.

On the day he walked out of the Hall for the very last time as a resident, he identified a need. He had recognized an information gap and a gradual distortion of events that have happened in the Hall over the years. He was convinced that the stories and events that have shaped Katanga into the most preferred hall in KNUST must not be left just in the minds and on the lips of those who witnessed them anymore. More so, to avoid further distortions and corruption of these historical events, it was necessary for them to be documented.

This amazing book, Chronicles of Katanga: A Momentous Orientation, written in simple language and structured into 18 breezy chapters, is his response to the need he identified. Courage takes the reader down memory lane and tells the stories of his famous Hall over the years. He recounts fondly his experiences, the events he witnessed both as a floor member and later as an Executive of the Hall from August 2007 to June 2011. However, the story backtracks sometimes to talk about happenings on the bigger KNUST campus itself and other past events in which Katanga was involved.

The book is about the history, activities and principles of Katanga. It is about the tenets of the so-called philosophy of ‘Katangeism’ expressed as solidarity and positive dynamism – a subject about which Courage is uniquely and eminently qualified to write. Courage’s experiences as a Katangee or Fellow (how students of Katanga are affectionately called) cut across different angles, levels and times.

In his early days as a young student of the Hall, Courage was close to most of the key personalities in the Hall, whom he understudied. He also actively participated in the activities of the Hall. He learned his way up into the most visible and agential office in the Hall: the Office of Hall Secretary. He was a member of the Hall Council – the highest decision-making body; he chaired both the 2010 Constitution Review Committee and Vetting Panel of the Hall. He has had extensive engagements with several alumni who have passed through the Hall at different times. Very few students of the Hall could boast of such a vastly rich and across board experience, which unquestionably grants him sufficient competencies to share insights about Katanga – what it stands for and has done over the years.

Katangeism, Courage explains, is coined from Katanga and simply concerns how the rights and welfare of all students of KNUST should be of interest to the members of the Hall; and that in situations where the rights of students are trampled upon or violated, students of Katanga are obliged to speak and act accordingly. Katangeism is also about standing with and for one another; oneness of purpose, where the interest of the Hall overrides that of the individual members. Katanga has always believed that student activism is about social change and transformation. The Hall has therefore placed this as an objective in the preamble of its constitution and remains relentless in this sacrificial duty. Courage touts that the reason Katanga has become a household name not just on the campus of KNUST but also in Ghana is because of its fearless endeavour to spearhead the fight for students’ rights. Most actions to defend student’s rights, either on KNUST campus or nationwide, are planned, influenced or led from Katanga.

While he does not cite enough national examples (perhaps, the only critique that could be raised against the book), Courage lists some key reforms introduced by KNUST authorities because of the agitations, petitions and demonstrations by the students of Katanga. They include inter alia the Students Clinic, the introduction of more taxis and shuttles to address transportation challenges on campus, the construction of speed bumps and the introduction of one-way traffic system to control over speeding and prevent possible accidents. Others include the building of a staircase around the Unity hall roundabout to avert the imminent danger that the steep pathway that used to be there could have caused.

Katanga is also noted for hilarious but educative hall week celebration dress codes and naming facilities and places on the KNUST campus that it SOLELY “colonizes”. “Amazingly”, Courage writes, “most of these names are popular and are used more than their official names”. Katanga named the road leading to the main Faculty area “MECCA Road” and has remained so till date. The Hall named the SSNIT hostel as GAZA and only a few people know it by its original name. Same goes for the GUSSS hostel, which Katanga named “Brunei” and the KNUST Law Faculty, that the Hall named the “HAGUE”. The Law Faculty naming, just like a few others, Courage admits, could not stick. But its reputation as the first and only hall of residence to do a live performance on the biggest entertainment platform in Ghana, TV3 Music Music has stuck (check YOUTUBE). Katanga is also the only Hall to play a football match with any Premiership side in Ghana. In the year 2011, the Hall played host to the best and most supported football club in Ghana, the Porcupine Warriors – Kumasi Asante Kotoko at the Paa Joe Stadium.

However, if the intentions of the students of the Hall are this noble, the tenets of Katangeism and how they are acted out are this honorable, benign and hilarious, why then is the Hall pilloried in some quarters as a home of troublesome students? Courage offers this explanation: While Katanga has been the bastion of student advocacy in KNUST, in the line of duty call–symptomatic of most freedom fighters –the Hall, regrettably, has had and continue to have some excesses. The excesses have rather been engraved on stones, whilst the numerous advantages of their actions have been written on the bank of the River Wewe (a river that passes through the University –KNUST).

Nevertheless, some of the excesses that have earned for the Hall negative recognitions, Courage admits, were self-inflicted and very much avoidable. The infamous case in point is the October 2008 clash between some students of the Hall and “the unverified rivals” of Katanga in KNUST –Unity Hall. The clash led to injuries, destruction of properties, rustications and other draconian sanctions. Courage unequivocally and rightly so deplores that rather barbaric and dastard incident (my words) as “disgraceful”.

After reading the book for the third consecutive time, I held a long pregnant pause as I reflected on the broader conversation that Courage has provoked. The narratives about some halls of residence in Ghanaian universities are framed in heroism; stoicism; valiance and undaunted activism. This has made them the dream halls of high and even junior high school students. Katanga is, no, stands tall, among these halls! Therefore, upon their admission into such halls, determined to keep the flame alive, but without the benefit of the sorely needed orientation, the newly admitted young and boisterous but naïve students usually end up defending and continuing the traditions in a manner that rather earn the halls negative returns. Sometimes, some of them even pay immensely hurtful personal prices – sustain injuries during violent confrontations, suffer rustications etc.

I pray that this invaluable work by Mr Courage Ahiati about Katanga would stimulate other (past) students of halls similarly situated (like the Casley Hayford Hall (Cassford) in UCC, Mensah Sarbah and Commonwealth Halls in Legon) to begin documenting their experiences for the benefit of the new and future generation of students. For as they celebrate and emulate past heroic feats of their forebears, they may guide themselves with the mistakes.

Aside from the present, future, Alumni and the many aficionada of Katanga as well as students and Alumni of KNUST who, for obvious reasons, would be enamored of the historical and memorable events that Courage captures in amazing detail about their beloved Hall and University, I believe also that, the book would immensely benefit other students and people similarly situated.

The school or university is more than a place for memorizing theories and equations for certificates – a very crucial lesson Courage learnt in the early days of his university life. Instead of harnessing the various resources embedded in the school/university environment for their total development, normally, most students focus disproportionately on just academics – only their subjects or programs of study.

As the reader engages with the Chronicles of Katanga, s/he may instantly be able to connect Mr Ahiati’s enviable writing prowess to some of the enterprises in which he engaged himself as a student. He did not just focus on his Political Science notes, the program he read at the University. He also took advantage of extracurricular opportunities to develop himself and, for instance, tremendously hone his passion for writing.

The hilarious, educative and historical events, insights, and his enviable writing skills aside, Courage’s overall account of his life in Katanga and KNUST broadly is of immense mentorship value.

The Chronicles of Katanga is a momentous orientation worth reading. Thanks for writing, Courage.