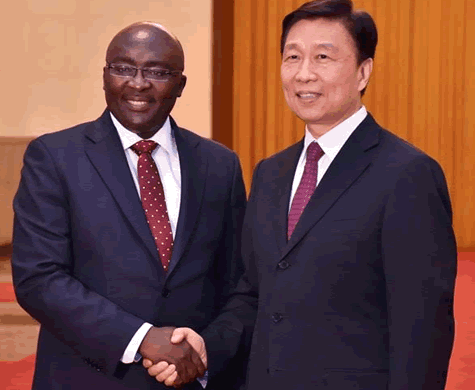 China is prepared to partner Ghana to undertake a massive transformation of the country, Chinese Vice President, Li Yuanchao, has announced.

He said China stood ready to pass on knowledge, expertise and assistance to Ghana to facilitate the transformation agenda of the government of President Nana Addo Danmkwa Akufo-Addo.

The Chinese Vice President disclosed this during a State Reception for his Ghanaian counterpart, Dr Mahamudu Bawumia, at the Great Hall of the People in Beijing.

In addition, Chinese companies would provide assistance in the railway, agriculture (Planting for Food and Jobs), industrialisation, energy, and transportation sectors, he indicated.

Vice President Dr Mahamudu Bawumia is on a four day official visit to China, at the invitation of the Chinese government. It is the first by a high level government official since the New Patriotic Party took office in January this year.

Dr Bawumia is leading a delegation of Ministers and government officials to the Asian country in a quest to deepen diplomatic and economic ties as well as create opportunities for Ghanaian businesses to form partnerships with their Chinese counterparts.

Ghana was among the first group of Sub-Saharan African countries that established diplomatic relations with China, and the two countries have enjoyed decades of strong ties.

The government is seeking to leverage Ghana’s abundant natural resources to undertake a massive overhaul of her infrastructural, industrial and agricultural base. In this regard, it is seeking partnerships to extract and process the massive deposits of bauxite at Nyinahin and Kibi, with a potential value of $460 billion, to fund the construction of thousands of kilometres of railway lines, roads, provide irrigation facilities and dams, and construct bridges, among others.

The government is also seeking greater diplomatic ties with her development partners, a step in the right direction, according to the Chinese Vice President.

“Since you were elected Vice President of Ghana, you and President Akufo-Addo have been committed to developing relations in a win-win cooperation with China. We highly appreciate this and thank you for that.

“Your Excellency, you are the first Ghanaian leader to visit China since your new government took office. This visit has a great significance for embarking on a new chapter in China-Ghana friendship and cooperation. I look forward to a deeper and open relationship between our two countries,” Li Yuanchao stated.

Vice President Bawumia on his part said it was time for deepened ties between both countries.

“Both President Akufo-Addo and I have been following with keen interest and have been very much impressed with the successes of the Chinese Government under the leadership of H.E. President Xi Jinping since becoming the President in November, 2012.”