China offers to support ‘One District One Factory’ with $2b

June 25, 2017 Africa/International, Lead Comments Off on China offers to support ‘One District One Factory’ with $2b 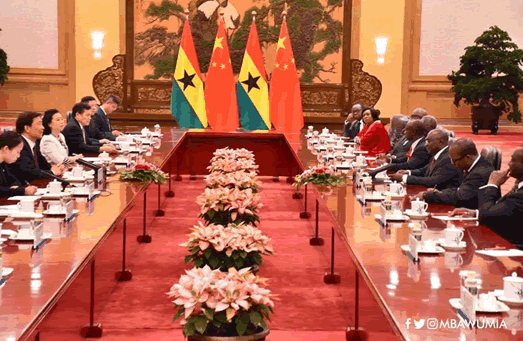 China is boosting Ghana’s government’s ‘One District One Factory’ initiative with a funding facility worth up to $2 billion.

This follows the signing of a Memorandum of Understanding that is committing that amount to a number of Ghanaian banks and the private sector led by the Association of Ghana Industries (AGI), and the Chinese government’s private sector development corporation.

Under the agreement, the China National Building Materials and Equipment Import and Export Corporation (CNBM) would provide up to 85 percent financing for viable projects recommended by the One District One Factory secretariat, which is under the Office of the President of Ghana, and accepted by the banks.

The facility would be offered to the banks at low interest rates, in the single digits, and has a minimum of eight years for repayment depending on the project.

Among others, CNBM is to construct the factories for Beneficiary Companies and equip the factories with the requisite and necessary equipment on a turnkey basis, to make them fully operational for the successful implementation of the Programme.

The MOU was signed in Beijing, China on Wednesday June 21, 2017, on the side lines of the four-day official visit of Vice President Dr Mahamudu Bawumia to China, the first by a high level government official since the New Patriotic Party took office in January this year.

Ghana Commercial Bank, Access Bank, Universal Merchant Bank and the Ghana Import and Export Bank have so far signed up to the compact, although other banks have the opportunity to join.

Speaking to the media after the signing ceremony the National Coordinator of the ‘One District, One Factory’ secretariat, Mrs Gifty Ohene-Konadu, explained that the facility will also cater for technical training and the provision of support services.

“The most exciting part of the financing is, the Chinese will provide a huge market access for most of the export commodities, which is expected to bring $2.5b revenue to Ghana annually

“This clearly shows how the NPP government is poised to make the private sector the engine for growth of the Ghanaian economy.”

The ‘One District One Factory’ programme is a flagship project of the Nana Akufo-Addo government designed to establish at least one viable factory in all 216 districts in Ghana as part of an industrialisation drive aimed at providing jobs and transforming the economic fortunes of the ordinary Ghanaian.