May 31, 2017 Sports Comments Off on Hearts secures deal with Fero Mobile 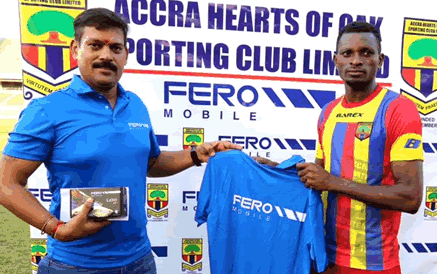 Electracom Limited, distributors of Fero Mobile Phones in Ghana, has signed a sponsorship deal with premier League side Accra Hearts of Oak.

The deal that runs till the end of the season, makes Fero Phones, the clubs official sponsor for the Man of the Match and Player of the Month awards scheme initiated by Hearts, to motivate players to go the extra mile for the club in the rest of the reason.

As part of the deal, Hearts of Oak Man-of-the-Match and Player-of-the-Month, winners will take home a sleek Fero Mobile Phone, cash prize and a polo shirt.

This was after the club reached successful agreement with the fast growing mobile phone distribution companies in Ghana.

Mr. Ajit Jain, Country Manager of Electracom Ghana Limited, was delighted with the new deal with the premier league side.

He said his outfit’s main focus was to use sports especially football (Hearts of Oak) and Badminton (Accra Badminton Club)to promote the brand.

Mr. Jain, said, they will continue to work with the club to promote their brand and also motivate the players to deliver and win the league for Hearts.

Leonard Tawiah became the first beneficiary of the initiative, when he emerged the Man of the Match after the game between Hearts and Liberty Professionals.

Fero mobile is a new global Smartphone manufacturer, which seeks to establish its products on the Ghanaian market.

Fero Mobile has also strike a deal with communication giants MTN, with Fero L100 sold in all sales outlet of MTN as well as all Telefonika, Izone, Melcom and all leading outlets accross Ghana.