May 30, 2017 Politics Comments Off on Ghana and Mali commit to strengthen ties 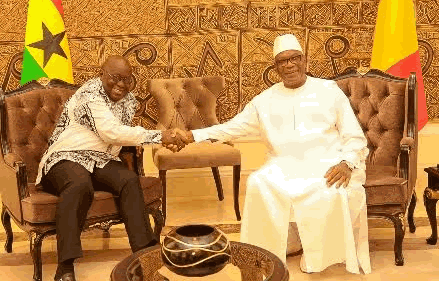 Ghana and Mali have pledged to work towards strengthening the ties of co-operation that exist between them, after the Presidents of the two countries expressed satisfaction with the current state of the relations.

In a joint communiqué issued at the end of a day’s working visit to Mali by President Nana Addo Dankwa Akufo-Addo on Sunday,  both nations resolved to reinforce their co-operation in the areas of trade, agriculture, security and the process of West African integration.

The two countries also re-affirmed their commitment towards the implementation of the ECOWAS protocols on the free movement of goods and persons in order to harness the corresponding economic and commercial benefits to the two peoples.

Touching on security, it was agreed that a framework to exchange and share information in tackling terrorism, violent robberies and organised crime be established.

“To efficiently address the issue of illegal activities at the borders, notably corruption and racketeering, both sides agreed to hold regular meetings in order to put an end to these practices,” the communiqué noted.

President Akufo-Addo, in his remarks to his Malian counterpart stressed that “even though there has been a change in direction and leadership in Ghana, our fundamental commitment to a close and sustaining relationship with the people of the Republic of Mali remains unchanged. Ghana continues to be by your side and continues to seek a relationship of intimacy and friendship.”

According to President Akufo-Addo, “we cannot and will not accept that other people can come and develop the continent of Africa for us. It will not happen, and the sooner all of us work together and recognize the necessity of collaborating on a platform that will lead to the prosperity of our peoples, the better.”

On the fight against terrorism, President Akufo-Addo assured President Ibrahim Boubacar Keita that “in Nana Akufo-Addo and in his government, the people of Mali have a strong and steadfast friend.”

He expressed the appreciation of the people of West Africa for “the sacrifices the Malian people, who are in the frontline of the fight against terrorism, are making to guarantee the peace and security not just of their own country, but the region as a whole.”

To this end, he reiterated Ghana’s commitment to “standing beside you in that fight and want you to know that whatever, within our modest means, we can do to promote the success of that struggle, you can count on us.”

President Akufo-Addo’s trip to Mali is in line with his quest to strengthen ties between Ghana and countries in the ECOWAS region. The President has undertaken a tour of countries in the economic bloc in a wider move to introduce himself as the new head of State of Ghana and to restate the country’s commitment to the ECOWAS project.

President Akufo-Addo during the tour rallied his counterparts to strengthen the regional bloc and give true meaning to the ECOWAS Protocols on Free Movement of Goods and Persons by promoting open borders in the Community.

He said such a move would promote regional cohesion and economic development; boost trade and tourism and ensure that the people of the ECOWAS reap the economic benefits thereof.

“The opening of our borders will give true meaning to the ECOWAS Protocols on Free Movement of Goods and Persons, and will spur on progress and prosperity for our peoples,” he said.